Uses and Advantages of Haptic Footwear 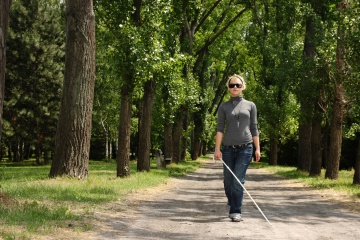 In theory, haptic footwear could work in tandem with a cane to add directional feedback for visually impaired people.
© ottokalman/iStockphoto

As mentioned earlier, the Lechal shoe conceived as a low-cost option for visually impaired people to help them navigate on their own. According to the World Health Organization (WHO), there are around 285 million people with visual impairments, about 90 percent of whom live in low-income areas [source: WHO].

The app has accessibility features that don't require the user to have to look at anything on the screen. As designed now, a person can use the accompanying phone app to input his or her destination before leaving, either using voice commands or foot movements. The wearer can then pocket the smartphone and follow the directions that are sent to the shoes. The app can store common destinations, and for areas that aren't easily accessible via Google Maps, the user can have the shoes map the route and use the foot-tap tagging ability to mark any obstacles.

Common aids for the visually impaired include canes, guide dogs, devices that give audio directions and help from other people. Canes can help a person avoid obstacles, and canes with sensors have even been tested and in some cases made available, but they haven't yet gone so far as to provide directions, so the shoes and cane could work in conjunction. Guide dogs are quite helpful for avoiding obstacles and other dangers, but they're expensive, not accessible to everyone, and there are still some places where they aren't allowed. Audio equipment for the visually impaired can be expensive and cumbersome, and having to listen to audio can distract from important audio cues going on around the pedestrian. They also might be hard to hear under noisy traffic conditions.

With haptic feedback, the user has the advantage of being able to continue to hear what's going on around him or her without audio distraction. And one day, if later models of the shoe incorporate proximity sensing, some people may be able to say goodbye to the cane.

Haptic footwear could prove useful to anyone wishing to be directed without having to stare a phone while walking. Walking while distracted by a phone or other devices is thought to be at least partially responsible for an uptick in pedestrian fatalities that started around 2010 [sources: Liberty Mutual, NHTSA, Shaver]. Plus, most of us already wear shoes, so haptic feedback worked into them should be far more unobtrusive than carrying an extra device.

The Lechal shoes, insoles and their accompanying app can also be used as a fitness-tracking system to track steps, activity type, duration, distance, calories and workout goals. It even includes social elements to let you share fitness and destination information with others. This could make it a viable replacement for dedicated fitness trackers.