If I put my smartphone in an armband or pocket while I run, can it overheat? 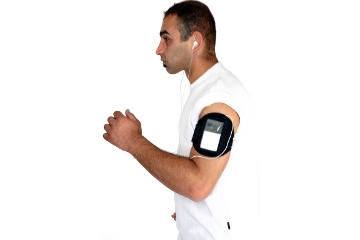 When you and your phone are both working out, is it possible to overheat your gadget?
Hemera/Thinkstock

Pumping yourself up with some rockin' tunes is a great motivator when you're exercising. And runners are especially likely to be seen sprouting earbuds on the road these days. But if those earbuds are attached to a smartphone -- which would likely be strapped to a runner's arm or tucked into a pocket -- will all the exertion and sweat associated with running cause the phone to overheat?

First, be aware that all electronic devices, including smartphones, give off a little heat. And if your phone ever gets a bit toasty, it's likely because you've got one of three problems: You're working off of a poor signal, your phone has an intense workload or your phone's battery is charging. The heat given off from any one of these causes can become intense. But sometimes, it's not so much the signal, workload or charging battery that's causing the overheating as it is the fact that the phone is in a case, which traps the heat being emitted instead of allowing it to disperse [sources: Herrman, Gordon].

If your phone starts to overheat, it will act to protect itself. Often, you'll get a warning, and then the phone will shut itself down. Or it may just die because the battery is out of juice; as a phone overheats, it drains the battery [sources: Ewan, Herrman].

So what happens when you add running into the mix? There's no evidence that carrying your smartphone while you run will cause it to overheat -- meaning if you're holding it in your hand, or it's snugly tucked into a pocket, the added warmth and sweat given off from your body while you run won't kick it into overheat mode. However, it's possible that if your phone is already on its way to overheating, the extra heat your body produces as you run could push it over the edge [source: Cook].

To be safe, tuck your case-free smartphone into a small personal items belt or into the zippered pocket of your hand-held water bottle holder when you're heading out for a run. Or just run really slowly.

I'm a runner, and I got my first smartphone recently. But I haven't taken it along on a run yet. When I do, I'll be sure to take it out of its case and slip it into the pocket of my water bottle holder.

You Don't Really Need Apps to Save Your Smartphone's Battery
Could someone stalk you using your own smartphone?
Is it smarter to use a retailer's mobile app or their Web site to shop with them?