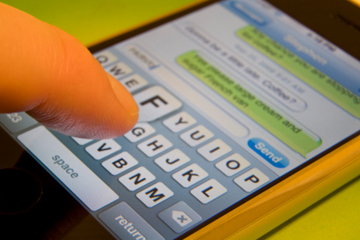 So you want to remember that funny text conversation forever? Or maybe even capture something useful? We'll show you how. See more Cell Phone Pictures.
©iStockphoto.com/Thinkstock

So let's say the only reason you'll ever use a screenshot for your smartphone is to show someone hilarious typos in text messages. Even if that was literally the sole purpose you learned how to take a screenshot -- and there are others, including keeping records of app or Web site information handy without an Internet connection -- I think we can all agree that it would be worth it.

But there are a lot of different phones out there and not everyone is immediately sure how to easily capture our auto-corrected hilarity. Let's take a shot at showing you how your mom's inadvertent double-entendre can be captured for eternity.

First off, let's start with the iPhone. Press and hold the "home" button at the bottom of your phone. While you're doing that, press the top "sleep" button. The screen will flash white for a moment, and voila. The image will be ready to text, e-mail, upload or gaze at in your camera uploads. Because those with Siri get her attention by pressing the "home" button, just wait patiently for her to quiet down and then press that "sleep" button as usual.

Nearly the same instructions go for Android phones running a 4.0 (Ice Cream Sandwich) platform. Hold down that "power" key, and this time press the volume down button. The screen will flash white, and you can access the image in your gallery.

Now that we've got those easy ones out of the way, let's take a look at some phones that make it a lot harder to crack the capture code. Grab the next page to learn more.

Unfortunately, not every phone is so simple. Let's start with earlier Android versions. First, let's talk about run-of-the-mill Android phones, which are "unrooted." (We'll discuss this in detail later, but this is your regular, out-of-the-box Android phone.)

There's no simple button pressing for early Android users. What you can do is go to the Android Web site and download the Android SDK. SDK is a development tool that's downloaded to your computer -- note that: not your phone. Once it's installed, plug your phone in through a USB cord and go to the "tools" section. From there, click on the "ddms" icon. Find your phone's name and then go to the "device" icon. Click on it and you'll see "screen capture." You'll see an image of your phone; find whatever you want to capture (on your phone) and simply press save to take a picture. Yup, not exactly simple.

If you have a rooted phone, you might have better luck. Rooted means the phone can perform all sorts of tasks that the Android operating system doesn't want it to; for instance, running apps from the Apple Store. So you can run apps that will capture the screen, but keep in mind that rooting your phone will void your warranty and isn't exactly encouraged.

You think that was tough? If you have a Windows phone, you might be even more disappointed. Because with the current Windows 7 device, you literally can't capture the screen.

Ok, maybe not entirely. If you have a developer unlock your phone (basically meaning you can test apps without having to go through the Windows Marketplace), you can gain access to a few apps that will help you capture your screenshots. However, some of them do require a PC connection.

Author's Note: How do I take a screen capture on my smartphone?

Apparently, I was totally taking for granted my iPhone's easy-as-pie ability to take screenshots. More than that, it turns out that there are a lot of people who are pretty darn angry that their phones aren't able to do the same thing. Good news for those loyal to Windows phones: The upcoming version (Windows 8) has been tapped to get an easy screen-capture feature.