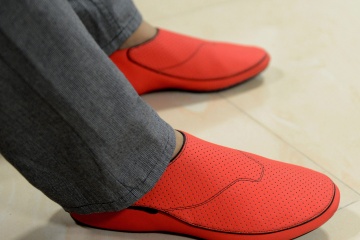 Could these sporty shoes lead to easier navigation for the vision-impaired?
© NOAH SEELAM/AFP/Getty Images

Wearable devices are the new big thing in electronics. Many of us are already strapping on a contraption that tracks our steps and other fitness metrics, and smart watches are on the market. But a wearable that has been around for eons is now in on the embedded electronics trend — the shoe.

Electronics in or on shoes isn't exactly an unheard of concept. We already have shoes that light up when we walk and shoe sensors that communicate with fitness apps. And researchers have been working other handy features into footwear, like GPS tracking to help keep tabs on the whereabouts of Alzheimer's patients, and sensors and wireless signals to help locate firefighters and other emergency workers in areas where GPS is likely to fail.

Soon, we'll also have shoes that communicate with us via haptic feedback. You probably haven't given it much thought, but haptic feedback is something you've already likely experienced, as vibrating actuators are already present in a lot of cellphones, tablets and game controllers. This just means that they emit vibrations that we can feel.

One product expected to hit the market running in 2015 is Lechal haptic shoes, designed to sync with a smartphone to provide hands- and eyes-free directions and to act as an activity tracker. The company will also release haptic insoles that you can insert into your regular shoes.

Haptic footwear holds great promise as an aid for the visually impaired, but it could also come in handy for anyone else who wants an inconspicuous wearable that can give directions without requiring that you stare at a smartphone or listen to audio. Read on to find out what's inside these handy fashion accessories.