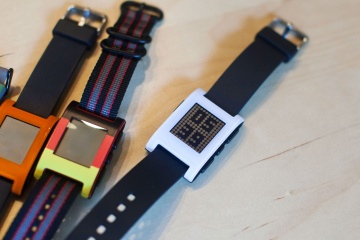 One of the selling points of the Pebble is its compatibility with any standard watchband.
© Ramin Talaie/Corbis

As with so many first-generation smart watches, the Pebble's aesthetic virtues were a little rough around the edges. It was flat, on the chunky side and a little awkward. In short, it had the makings of something that gadget lovers would embrace but that less tech-obsessed folks would not. That said, the Pebble's appearance was still a quantum leap ahead of many other contemporary smart watches, many of which reflect a fashion sense that would only appeal to a pocket-protector-wearing minority.

The Neptune Pine, for example, is a powerhouse of a watch, basically duplicating many of the features of an Android smartphone. It's also so big that it will overwhelm the wrist of anyone who isn't the size of an NFL offensive lineman. First-generation versions of watches from almost all major manufacturers suffered from similar fashion faux pas.

These days, though, other watches are catching up to Pebble in terms of style. The Moto 360 comes with an oversized but pleasing round face. The LG G Watch R is round, too, and looks like a traditional beefy men's watch.

Looks aside, other companies are taking a different approach to functionality. With the Gear 2, Samsung opted for a large, color touchscreen and an interface that feels like a smartphone. It also has a built-in heart monitor. Yet all of those features mean a drastically shorter battery life and a much steeper price at $299.

One of the most formidable challenges to Pebble comes from the Apple Watch. With its rounded corners, rectangular shape and aluminum alloy case, the Apple Watch looks like a small iPod. It has a touch screen that you can use to tap and swipe through menus, as well as two buttons, one of which rotates to help you scroll through options.

As with every other watch, the Apple Watch connects to your smartphone, although it will only work with Apple phones. It has Bluetooth, but it's also equipped with Wi-Fi, which means you'll be able to access your iPhone's content and connection from all over the house instead of just across the room, at least for as long as the roughly 18-hour battery life lasts.

Still, the Apple Watch is targeting a wealthier class of consumer. Its most basic model sells for $349. If you prefer a steel case you'll drop $200 more. The Pebble, it seems, is specifically targeted toward a more frugal audience. That includes the newest Pebble.