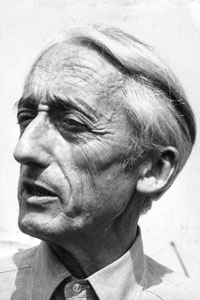 If you've ever seen any of those classic 1970s TV documentaries about underwater adventurer Jacques Cousteau, the father of modern scuba diving, you may have noticed that when he descended into the depths to explore shipwrecks, he didn't just wear some run-of-the-mill watch from the jewelry store bargain bin.

Instead, Cousteau sported a bulky, shiny, complicated -- and incredibly cool-looking -- PloProf diver's watch that he'd actually helped timepiece manufacturer Omega design. But he wasn't just trying to be stylish. Cousteau's watch had super-luminous hour markers and hands set against a dark dial face, which insured that he could make out the time even in low light underwater. More importantly, the watch's stainless steel case and extra-tough mineral crystal were designed to resist water pressure and remain watertight 1,968 feet (600 meters) below the surface, far deeper than even the most accomplished and daring scuba expert would dare venture. It also had a moveable bezel, a ring surrounding the watch face, which made it easier for the wearer to mark the amount of time that he or she intended to spend underwater. And its special, extra-rugged bracelet was touted as shark-proof -- though it's hard to imagine one of those underwater predators trying to nibble it off a diver's wrist [sources: Omega, Coolhunting.com, Richardson].

Cousteau's gadgetry might seem like an antique to today's professional divers. But for both recreational scuba and free divers and ordinary landlubbers who simply enjoy wearing a precision-crafted, elegantly-designed piece of machinery, a diving watch is still de rigueur as an accessory. Publications and Web sites for the watch-collecting subculture are still filled with advertisements for high-end diving watches designed by manufacturers like Certina and Tag Heuer, with prices sometimes in the thousands of dollars [source: Richter].

Can a dive watch save your life? 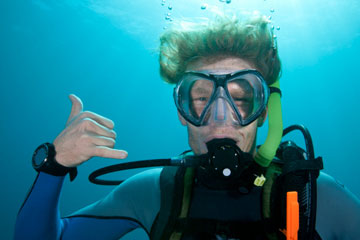 Dive watches help scuba divers calculate when they should return to the surface and help them to monitor how quickly they ascend.
Justin Lewis/The Image Bank/Getty Images

Whether you're a scuba diver or a free diver who depends on lung capacity, "no diver should enter the water without a reliable timekeeping device," scuba-diving experts and physicians Michael B. Strauss and Igor V. Aksenov write in their 2004 manual "Diving Science: Essential Physiology and Medicine for Divers." For breath-hold diving, monitoring both your time underwater and the amount of time that you're resting on the surface between dives is critical because it enables you to keep within the precise parameters your body can handle. Additionally, monitoring your time at the bottom enables you to calculate precisely when to start your gradual ascent, which reduces the danger that you'll black out before you get to the surface [source: Strauss and Aksenov].

With scuba, where you're likely to descend even deeper for longer stretches and are dependent upon a limited air supply, the need to keep careful track of the time is even more crucial. That's why dive watches are designed not only to withstand the extraordinary stresses of the underwater environment, but also to dependably provide critical, potentially life-saving information to divers and to be as easy as possible to use underwater.

Those considerations went into the first watch specifically created for serious diving back in the 1930s, the Omega Marine. To protect the watch's time-keeping mechanism from temperature variations and pressure, designers enclosed it in a then-innovative stainless steel case. To ensure the watch's durability under extreme stress, researchers subjected it to rigors more intense than any diver likely would face -- immersing it, for example, in water heated to 185 degrees Fahrenheit (85 degrees Celsius) for several minutes, and then abruptly plunging it into near-freezing water. In another experiment, they lowered the watch to the bottom of Switzerland's Lake Geneva, a depth of 240 feet (73 meters), and left it there for 30 minutes. Ultimately, in 1937, the Swiss Laboratory for Horology certified the watch as able to withstand pressure 13.5 times what it experienced on the surface. Last but not least, they persuaded underwater explorer Charles William Beebe, who at the time held the world record for ocean depth, to take the watch for a test dive [source: Omegawatches.com]. 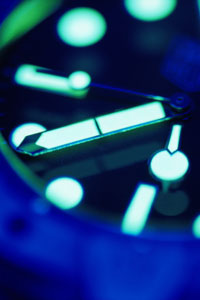 Dive watches usually have illuminated watch hands and markers so they can be used in low light conditions.
Ken Usami/Photodisc/Getty Images

Over the past 70 years, inventors have come up with scores of innovations in an effort to improve diving watches. In the early 1970s, for example, a Japanese inventor named Yoshiaki Fujimori came up with a new type of ultra-stiff seal ring that was less likely to deform under pressure than a rubber seal [source: Fujimori]. In 1988, another team of inventors from Japan unveiled an electronic diving watch that included a water pressure sensor [source: Utemoto]. More recently, in 2010, French inventor Jean-Francois Ruchonnet received a patent for a depth gauge that would fit inside a diving watch [source: Ruchonnet]. Swiss inventors have even developed a specialized diving watch that, when combined with a sensor attached to the chest, continuously monitors a diver's heart rate [source: Angelini].

To withstand great pressure and protect the watch mechanism, the cases of dive watches are made from extremely hard, stiff materials [source: Omega]. One popular choice is stainless steel, an alloy whose coating makes it resistant to being deformed by water and succumbing to pressure as well as corrosion. (It's so tough that it's also used by some automakers to make cars' structural parts more crash resistant [source: European Stainless Steel Development Association].) Titanium and 18-karat gold are other common choices.

If you're actually going to wear a diving watch for diving, rather than just because it looks cool, be sure to get one that conforms to ISO 6425, the internationally-recognized standard that certifies a watch is capable of resisting pressure, moisture and works underwater for extended periods of time. To earn that distinction, a watch has to function while immersed in water for 50 hours. Additionally, after being heated to up to 113 degrees Fahrenheit (45 degrees Celsius) for 20 minutes, testers drip water onto the exterior of the watch face. If condensation develops on the inside, the watch won't pass. If the watch is rated for 656 feet (200 meters) of depth, it has to be able to withstand 125 percent of the pressure found that deep, and keep working for a two-hour period [source: Avionica].

ISO 6425 also requires a watch to have certain important functional features, such as a rotating bezel, a ring around the watch face that allows a diver to mark five minute increments of time. The watch also must have a luminous tip on the second hand, so that it can be seen even in the dark ocean depths, and continue to function when exposed to salt water and to the presence of a magnetic field. It's also required to withstand a blow from a 6.6 pound (3 kilogram) hammer at an impact velocity of 14.4 feet per second (4.4 meters per second). The watch band undergoes similarly rigorous tests, to ensure that it won't snap under stress when it's in deep water [source: Avionica].

Depending on how much money you have to spend, there are other features you can get as well. Some dive watches include multiple gauges that measure elapsed time on the bottom, and have alarms that flash or vibrate so you can sense them even when water muffles sound. Others are made from high-tech ceramic composites -- the cutting edge of pressure resistance -- instead of steel or titanium. And some even have special anti-glare crystals on their faces [source: Naas]. It's your choice which features fit your diving needs!

When I was a young boy in the 1960s, I remember being fascinated with scuba divers and deep sea exploration. In part, it was because of the classic TV show "Sea Hunt," starring Lloyd Bridges as intrepid diver Mike Nelson. But I also remember that my cousin, who was serving in the U.S. Navy at the time, took up scuba for fun, and came home on leave and showed me the oxygen tank, fins, mask and other gear that he used for his hobby. Since then, I've been snorkeling in the Florida Keys, but I've never gotten around to taking a scuba course and getting a certification. It's still on my list of things that I want to do someday, right after I learn to play surf music on the electric guitar.