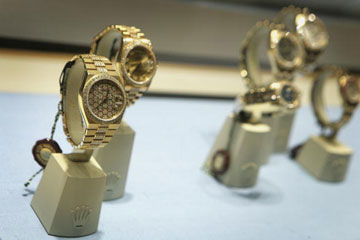 Jewel-encrusted luxury watches are displayed in a window at a store in Dubai.
Chris Jackson/Getty Images News/Getty Images

In March 2012, at a jewelry show in Switzerland, watchmaker Hublot unveiled what news reports hailed as the world's most expensive wrist watch -- a timepiece encrusted with 1,282 diamonds, including six stones that weighed more than three carats apiece. It took 17 workers 14 months to set all the stones in the one-of-a-kind timepiece. The price tag? Five million dollars. The company's president, Jean-Claude Biver, told the Baltimore Sun that it'd be hard to make a pricier watch than this one, given that "the surface of a watch is limited" and there just isn't much room for more bling [source: Hennigan].

Hublot's over-the-top watch is an elegant piece of wrist candy, to be sure, even if you wouldn't dare to wear it on the street without an armed escort. But if you're concerned about actually using a watch to tell time, this one probably isn't that great of a choice, since there's so much glitter on the face that the positions of the hour, minute and second hands are tough to discern. Also, there's no digital display and no stopwatch mode, so it wouldn't be very useful if you want to keep track of your pace when you go for a jog in the park. In comparison, a humble Timex Ironman T5E321, the sort of watch you can purchase on Amazon.com for as little as $47, can do all of that and far more. It has a back-lit display that you can read clearly even at night, and if you're a traveler, you can set it to flip between two different time zones. In a pinch, it even can double as an alarm clock.

But most importantly, the $5 million watch doesn't necessarily keep time more accurately than a $47 watch -- at least to any degree you could discern. In a study published in Horological Journal in 2008, a researcher from the National Institute of Standards and Technology used sophisticated scientific equipment to test the performance of four cheap watches, including a counterfeit Rolex purchased from a street vendor for $15. He found that all four were astonishingly precise, to within a few thousandths of a second per day [source: Lombardi].

So for strictly utilitarian purposes, the answer to the question we've posed is a simple "no." But "better" is subjective, and people pick watches for a lot of other reasons besides telling time. What makes one watch better than another, and how do you choose one that best suits you?

What makes one watch better than another?

Since most modern watches are pretty much equally reliable in terms of keeping time, how do you pick the best watch for you? Your choice really depends on what qualities you value in a timepiece and what you're willing to spend to get those qualities. Here are a few factors you may want to consider:

For some reason, I’ve never been a big watch-wearing guy, maybe because I don’t like to have something around my wrist, and because I tend to be absent-minded and misplace expensive things that I take off at night. But as an adult professional, of course, I’ve also had the need to be punctual and to manage my time. For years, I compromised by wearing a cheap Timex digital running timer with a lightweight plastic wristband, and kept it on constantly, even when I slept. The advent of the iPhone, which has the time prominently displayed on the opening screen, freed me from watch wearing. I even use my iPhone as a running timer and an alarm clock.

Here’s Something Else Your Smart Watch Can Do: Detect Irregular Heartbeat
Hold on to Your Socks. They’ll Help You Watch Netflix
Body Blow! Body Blow! Counting Punches With Wearables for Boxers