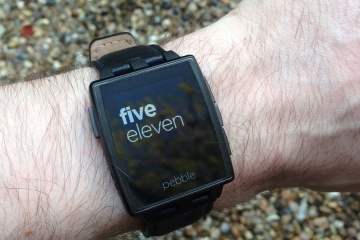 We’ve all dreamed of a communicator watch that will make our lives as cool as those of spies in comics and film. Can the Pebble make you feel like the future is now?
© Matthew Shaw /Getty Images

As tech gadgets go, it's not very geeky. It's smooth, shiny and has an almost Zenlike appearance. That calming exterior isn't just a façade for the Pebble smart watch. Compared to so many adrenaline-jolting high-tech devices, the Pebble is meant to be more serene and more harmonious, designed to tie together fast-paced modern life into a simple (yet smart) low-key wristwatch experience that's both fashion conscious and fun to use.

The Pebble smart watch links to your smartphone, tablet or other portable device via wireless Bluetooth signals. It doesn't matter whether you're devoted to Apple or Android; Pebble works with devices that run either operating system. Once connected, the Pebble becomes a wrist-mounted technological hub of sorts, providing notifications for calls, texts and emails, in addition to updates from Facebook, Twitter and other social media accounts.

You can install a bevy of wonderful, wild or sometimes just weird apps to your Pebble watch. As of spring 2015, there were more than 6,000 apps made specifically for the watch. Because Pebble's manufacturer has opted to provide an open source software development kit, just about anyone can design and release apps, meaning new software appears almost daily, giving you the opportunity to continually tweak the watch's capabilities to your preferences.

As wristwatches go, the Pebble is a powerful multifunctional tool. You can breeze through email, appointments, weather reports, sports scores and your personal fitness statistics. Adding or removing apps changes your Pebble's functions until you're happy with the kinds of notifications and briefs you see. And yes, if you're wondering, you can even use it to check the time.

Unlike so many new darlings of the tech industry, Pebble isn't a quirky one-hit wonder. Its 2013 debut parlayed into multiple new versions, all of which see increasing demand not just from geeks, but from people who seek simplicity and sleekness in all of their gadgets.

Pebble isn't an offshoot of an established corporate behemoth. It's a small-business success story. Thanks to forward-thinking businessmen and some daring investors, it's become a reminder that anyone with a few good ideas and some persistence can shape a whole segment of a global industry.

A comparison of the Pebble and the Apple Watch
©HowStuffWorks 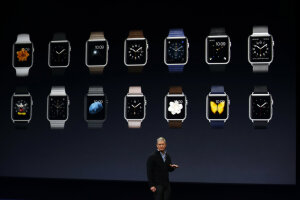 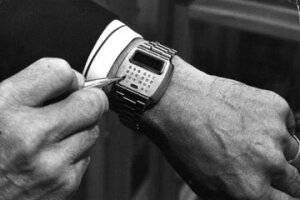