How to Install New Entertainment Electronics in Your Car

Things to Know About In-Car Electronics 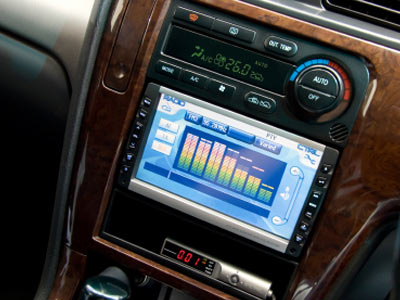 So, now that you have a pile of car audio components, how do you make it all fit within the confines of your car's dashboard?
Anatoly Vartanov/iStockphoto

­Is it getting simpler to install electronic components in your car? Is it at least any easier than it used to be? Not necessarily. The sheer proliferation of electronic devices for your car has complicated the most basic issues: Where are you going to find the space to install these things? Most cars come with a slot in the dashboard that can hold a stereo and a CD player, or alternatively a DVD player, a navigation system or maybe even an iPod dock. Sure, getting these devices mounted in the dash and interfaced with the car's electrical system and speakers is a complex task, but not really any more difficult than it ever was.

But what if you want all of these things at the same time? Again, we're back to the simple question, where are you going to put these things? If the DVD player or navigation system requires a video display, how does that fit in? If the problem you're facing is an embarrassment of electronic riches, Kenwood electronics has a possible solution: the Kenwood CarPortal. This device, which debuted in 2007, is a floating console that fits over your dashboard, and allows you to install several different types of electronic gadgets without having to open the dashboard at all. Devices that can be installed via the CarPortal include satellite radio receivers, digital (HD) radios and DVD players. And not only can these devices be present at the same time but they can be controlled through a common LCD touch-screen interface. The touch screen can even be used to control your iPod [source: Crutchfield].

Kenwood's CarPortal isn't quite as good as having all these devices preinstalled in a high-dollar luxury car, but it's a lot cheaper -- about $350, not counting the cost of the electronic gadgetry you plan to install.

Read the next page for a few examples of in-car entertainment electronics offered by the well-known names in the industry.