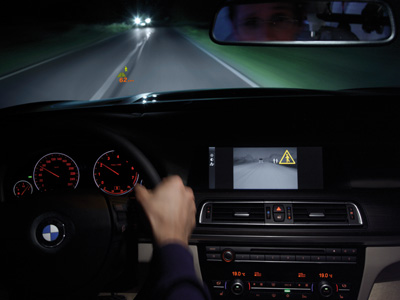 Car Gadgets Image Gallery BMW's Night Vision with Pedestrian Detection system allows drivers to see what (or who) is down the road -- even on the darkest nights. See more pictures of car gadgets.
Courtesy BMW USA

How many cool movies have you seen where a secret agent drives an exotic car through the mountains without any headlights? Or a low-flying AH-64 Apache pilot who moves in for a kill in pitch blackness? What about the urban legend of the 200-mile per hour (322 kilometers per hour) Lamborghini used from making covert drug runs at night, all the while escaping detection under a blanket of darkness? All of these images stem from the concept of night vision.

Perhaps the most common application for night vision is military. Soldiers like the one flying the Apache rely on night vision goggles as much as they rely on weapons and training. In short, night vision brings daylight to darkness. Pilot vision, rifle vision for soldiers and even driver vision are all cutting-edge applications for night vision technologies.

In this article, we'll look at night vision systems found in production cars. We won't be busting the case on the mythical Lamborghini, but you will understand how two of the leading manufacturers in the auto industry are taking back the night in attempt to make driving in the dark safer. In recent years, multiple studies have been conducted in the United States as well as Europe and they all seem to paint the same general picture: The majority of driving is done with the aid of daylight, yet a high volume of fatal accidents occur at night.

­If you've ever driven on a desolate road outside of the city and seen a deer or other type of nocturnal animal flash across your headlights, then you know just how poor night visibility can be. Wouldn't it be nice if you could see what's up ahead, or even alongside the road while driving after sundown? The individual brain-trusts at BMW, Mercedes, Toyota and General Motors think that would be a good idea, too. That's why each has taken a crack at developing night vision systems.

Let's get started by learning the basics of night vision and take a look at early attempts at in-dash night-vision systems on the next page.

What is night vision?

Infrared light actually falls into three classifications: near-infrared (near-IR or NIR), mid-infrared (mid-IR or MIR) and far-infrared (far-IR or FIR), also known as thermal-infrared. The difference between the three types of infrared light comes down to wavelengths. Near-IR, or NIR, has the shortest wavelength -- smaller than 1.5 microns -- and is closest to what we as humans can see as visible light. Far-IR, or FIR, is quite different. Thermal infrared wavelengths can be up to 30 microns and FIR is emitted from an object rather than reflected. In other words, FIR gives off thermal signatures while the other two types of infrared radiation do not.

The two main methods of night vision are thermal imaging and photon detection or image enhancing. Both are used regularly and both have their own advantages and drawbacks. Thermal imaging isn't quite as clear, but it is especially effective for picking up heat signatures. For instance, a soldier looking through a set of thermal imaging night-vision goggles would be able to spot an enemy that is hiding behind a bush or another object that gives off a colder signal. Unfortunately, the bright image could also be a friendly troop. Thermal imaging simply isn't clear enough to show that kind of detail.

Image enhancement on the other hand is very clear. Perhaps you've seen an example of imaging enhancement night vision on a news broadcast or military show. Oftentimes the picture is green, but other than that, the visual is clear as day. Image enhancing takes protons from ambient light and converts them into electrons. These electrons are then chemically and electrically converted into images that appear to be similar to watching an old black-and-white movie.

Next, let's take a look at how the automakers make use of night vision systems.

In 2000, General Motors offered a thermal night-vision system in its Cadillac line of vehicles. The system was innovative, but it was also expensive and didn't produce very clear images. Toyota also gave night vision a shot, and even now the automaker continues to offer an in-dash system in some Lexus models. The Lexus system has its fans, but if it's so effective, then why hasn't this technology spread to every vehicle on the road? One theory is that it seems as if the technology just isn't fully ready for automotive applications. Not yet, anyway. As you can imagine, night-vision technology is expensive and if you use inexpensive components, the quality simply won't be there.

Two of Germany's automotive stalwarts, BMW and Mercedes-Benz, have taken a damn-the-torpedoes approach to in-dash night-vision systems. These two auto manufacturers have been offering night-vision systems in vehicles since 2006. Fittingly, the two automakers, which have been competing against each other in the luxury market for the better part of 50 years, offer systems on complete opposite ends of the proverbial spectrum. Each system accomplishes its goal and each has its benefits and costs.

In the next section, we'll learn how these two companies are making use of the latest in night-vision technology.

Taking your eyes off the road while you're driving is never a good idea -- especially at night. That's why Siemens is in the process of developing a night-vision system that projects the images in a heads-up display (HUD) arrangement. Similar to those found in the cockpit of an F-16 Fighting Falcon, a HUD night-vision system would certainly seem to be a safe alternative to looking at a remotely positioned display screen. However, the HUD does have some drawbacks. Having a display in front of a driver can also prove to be distracting. While no system seems to be perfect, the fact remains that night-vision technology is on the cusp of availability and very well could be the next must-have gadget for your car. 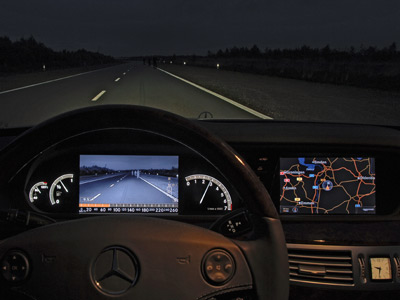 You can read more about light, night vision and other related topics on the next page.