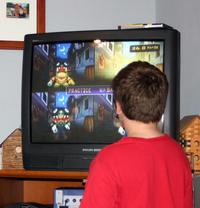 The ratings system for video games is relatively new compared to the ratings systems used by other entertainment industries -- and so far, it's been a rocky road. The Entertainment Software Rating Board (ESRB) comes under fire on a regular basis, most recently with the hidden "Hot Coffee" mini-game in "Grand Theft Auto: San Andreas." With video game sales topping $7 billion in 2004, the focus on game ratings will only intensify [ref].

In this article, we'll learn how the ESRB rates games and how they enforce their ratings. We'll also examine the effects of ratings on game sales and discuss how the "Grand Theft Auto: San Andreas" controversy has affecting the video game industry.

The ESRB does not rate the quality of games, but tries to objectively describe their content and identify anything that is potentially offensive. Each game is issued a rating and specific content descriptors such as "Strong Language" or "Edutainment."

A minimum of three game raters are responsible for rating each game. These raters receive special training, and their identities are kept hidden to preserve the integrity of the rating process. The ESRB also requires that the raters have no connections to the game industry.

When a publisher plans to release a game, they submit an application to the ESRB. Then they send a video of footage from the actual game, including the most extreme examples of potentially offensive content and overall game play. The raters view this footage -- they never actually play the game -- and assign it an ESRB rating (for example, E (Everyone) for a game that is suitable for ages 6 and over).

If the raters all agree, the rating becomes official. If they disagree, additional raters view the game footage and try to reach a consensus on the rating. The ESRB also reviews game packaging to make sure it displays the ratings correctly and conforms to ESRB standards.

This page on the ESRB Web site explains the different ratings and content descriptors. Additionally, online games that include user-generated content (such as chat, maps, and skins) carry the notice "Game Experience May Change During Online Play" to warn consumers that content created by players of the game has not been rated by the ESRB.

Next, we'll see how voluntary ratings systems like the ESRB differ from legal controls on media content.

The (ARC) is also a part of the ESRB. The ARC monitors advertising for video games to make sure that all ads "follow standardized requirements for the display of ratings information and that advertising content is responsible, appropriate, truthful, and accurate. It also implements marketing guidelines that prohibit game publishers from targeting audiences for whom products are not appropriate" [ref].