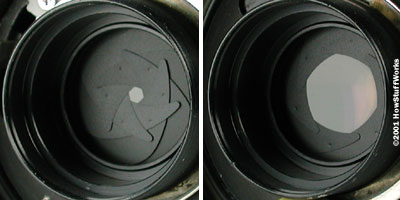 The plates in the iris diaphragm fold in on each other to shrink the aperture and expand out to make it wider.

In the last section, we saw that you need to carefully control the film's exposure to light, or your picture will come out too dark or too bright. So how do you adjust this exposure level? You have to consider two major factors:

To increase or decrease the amount of light passing through the lens, you have to change the size of the aperture -- the lens opening. This is the job of the iris diaphragm, a series of overlapping metal plates that can fold in on each other or expand out. Essentially, this mechanism works the same way as the iris in your eye -- it opens or closes in a circle, to shrink or expand the diameter of the lens. When the lens is smaller, it captures less light, and when it is larger, it captures more light.

The length of exposure is determined by the shutter speed. Most SLR cameras use a focal plane shutter. This mechanism is very simple -- it basically consists of two "curtains" between the lens and the film. Before you take a picture, the first curtain is closed, so the film won't be exposed to light. When you take the picture, this curtain slides open. After a certain amount of time, the second curtain slides in from the other side, to stop the exposure.

This simple action is controlled by a complex mass of gears, switches and springs, like you might find inside a watch. When you hit the shutter button, it releases a lever, which sets several gears in motion. You can tighten or loosen some of the springs by turning the shutter speed knob. This adjusts the gear mechanism, increasing or decreasing the delay between the first curtain opening and the second curtain closing. When you set the knob to a very slow shutter speed, the shutter is open for a very long time. When you set the knob to a very high speed, the second curtain follows directly behind the first curtain, so only a tiny slit of the film frame is exposed at any one time.

The ideal exposure depends on the size of the light-sensitive grains in the film. A larger grain is more likely to absorb light photons than a smaller grain. The size of the grains is indicated by a film's speed, which is printed on the canister. Different film speeds are suited to different types of photography -- 100 ISO film, for example, is optimal for shots in bright sunlight, while 1600 film should only be used in relatively low light.

Inside a manual SLR camera, you'll find an intricate puzzle of gears and springs. Click on each picture for a high-resolution close-up shot.

As you can see, there's a lot involved in getting the exposure right -- you have to balance film speed, aperture size and shutter speed to fit the light level in your shot. Manual SLR cameras have a built-in light meter to help you do this. The main component of the light meter is a panel of semi-conductor light sensors that are sensitive to light energy. These sensors express this light energy as electrical energy, which the light meter system interprets based on the film and shutter speed.

Now, let's see how an SLR camera body directs the real image to the viewfinder before you take the shot, and then directs it to the film when you press the shutter button.