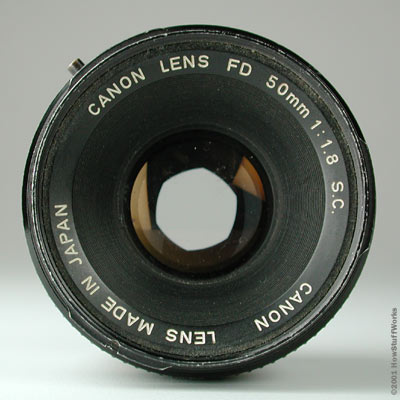 In the last section, we saw that at any one point, a lens bends light beams to a certain total degree, no matter the light beam's angle of entry. This total "bending angle" is determined by the structure of the lens.

A lens with a rounder shape (a center that extends out farther) will have a more acute bending angle. Basically, curving the lens out increases the distance between different points on the lens. This increases the amount of time that one part of the light wave is moving faster than another part, so the light makes a sharper turn.

Increasing the bending angle has an obvious effect. Light beams from a particular point will converge at a point closer to the lens. In a lens with a flatter shape, light beams will not turn as sharply. Consequently, the light beams will converge farther away from the lens. To put it another way, the focused real image forms farther away from the lens when the lens has a flatter surface.

Increasing the distance between the lens and the real image actually increases the total size of the real image. If you think about it, this makes perfect sense. Think of a projector: As you move the projector farther away from the screen, the image becomes larger. To put it simply, the light beams keep spreading apart as they travel toward the screen.

The same basic thing happens in a camera. As the distance between the lens and the real image increases, the light beams spread out more, forming a larger real image. But the size of the film stays constant. When you attach a very flat lens, it projects a large real image but the film is only exposed to the middle part of it. Basically, the lens zeroes in on the middle of the frame, magnifying a small section of the scene in front of you. A rounder lens produces a smaller real image, so the film surface sees a much wider area of the scene (at reduced magnification).

Professional cameras let you attach different lenses so you can see the scene at various magnifications. The magnification power of a lens is described by its focal length. In cameras, the focal length is defined as the distance between the lens and the real image of an object in the far distance (the moon for example). A higher focal length number indicates a greater image magnification.

Different lenses are suited to different situations. If you're taking a picture of a mountain range, you might want to use a telephoto lens, a lens with an especially long focal length. This lens lets you zero in on specific elements in the distance, so you can create tighter compositions. If you're taking a close-up portrait, you might use a wide-angle lens. This lens has a much shorter focal length, so it shrinks the scene in front of you. The entire face is exposed to the film even if the subject is only a foot away from the camera. A standard 50 mm camera lens doesn't significantly magnify or shrink the image, making it ideal for shooting objects that aren't especially close or far away.

Lenses in the Lens

A camera lens is actually several lenses combined into one unit. A single converging lens could form a real image on the film, but it would be warped by a number of aberrations.

One of the most significant warping factors is that different colors of light bend differently when moving through a lens. This chromatic aberration essentially produces an image where the colors are not lined up correctly.

Cameras compensate for this using several lenses made of different materials. The lenses each handle colors differently, and when you combine them in a certain way, the colors are realigned.

In a zoom lens, you can move different lens elements back and forth. By changing the distance between particular lenses, you can adjust the magnification power -- the focal length -- of the lens as a whole.