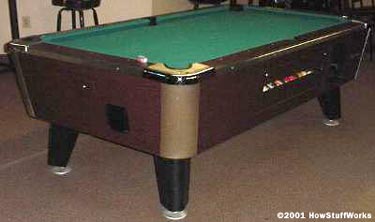 There are a variety of games played on billiard tables. The games are split into two general categories: pocket billiards and carom billiards.

Called pool by most people, pocket billiards has six holes (pockets): one in each of the four corners and one in the middle of each long side of the table. An interesting fact is how the name pool came about. As pocket billiards increased in popularity in England in the late 1800s and early 1900s, gambling houses called pool rooms installed the tables as another form of entertainment. They were called pool rooms because people would place bets into a common fund ("pool") that would pay out to the winners. Eventually, the billiards tables proved so popular that they became the predominant entertainment at these establishments and the name "pool room" came to refer to a place where you played pocket billiards, and therefore pocket billiards became "pool."

These games are played on tables without any pockets. Both variations are played with three balls, one white, one red and a white ball with a red spot.

There are nearly as many types of tables as there are variations on billiards.

The information below lists the specifications of some of the more common table designs.

The tables listed above are the most common, but you can find billiards tables in all shapes and sizes. A version that you sometimes see is called bumper pool and has rubber columns (bumpers) arranged on the playing surface. Most of these tables are round or octagonal in shape and have one or more pockets between the bumpers.

Billiards is an exciting and challenging sport that can be enjoyed by everyone. If you can hold a cue and hit the balls with it, you can play a basic game of billiards. But, like any worthy skill, excellence at the sport does require practice and an understanding of the equipment.

For more information on billiards and related topics, check out the links below.