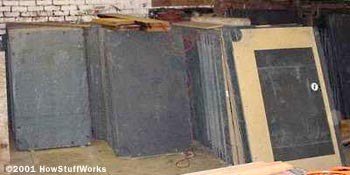 Slate is the preferred material for the play surface.

The playing surface of a billiard table has traditionally been made using a large slab of slate. Slate is a bluish-gray rock that cleaves (splits naturally) in broad, flat segments. Mainly composed of chlorite, mica and quartz, slate is formed when layers of clay sediment (the soil and debris that settles at the bottom of a body of water) with large concentrations of these minerals are compressed into sedimentary rock. The sediment hardens in thin layers as it compresses, creating a very hard rock with hundreds of naturally flat layers.

Slate can be ground and polished into a perfectly flat surface fairly easily, which is why it is sought after for billiard tables. Slate can be found all over the world, but major exporters include Italy, Brazil, China and India. The best slate for billiard tables comes from the Liguarian region of northern Italy. Because of this, Italian slate is preferred for a quality billiard table.

The cost of transporting slate due to the size and weight add considerably to the overall cost of a quality table. The slate is normally three-quarters of an inch to 1-inch (1.9 cm to 2.54 cm) thick and weighs between 400 and 600 lbs (181.4 kg to 272.1 kg). To make it easier to transport and less prone to fracturing from stress, the slate is normally split into three slabs, each about 150 to 200 lbs (68 kg to 90.7 kg). While this makes it much easier to move and set up, the three-slab version requires some work to ensure that the three slabs match perfectly and are flat all the way across. A few manufacturers use a single, large piece of slate instead of three pieces, but the three-slab method is generally preferred.

The slate should be framed on the underside with wood.

Ideally, the slate should be oversized. This means that the slate is slightly larger that the actual playing surface so that it extends beneath the rails of the table, providing additional strength to the rails. Most quality tables have the slate framed as well, with a wood backing glued to the underside of the slate. The felt cloth that is stretched over the slate is stapled or tacked to the frame. Without the frame, the cloth would have to glued directly to the underside of the slate.

The slate is carved out around the edges where the pockets will go. Also, holes are drilled along the edge so that the slate can be bolted to the top of the table frame.

Italian slate is considered the best slate to use because it absorbs water better than any other type. This means that there are few problems with dampness or humidity affecting the cloth.

The biggest problem with non-slate surfaces is that they warp easily and don't have the durability to maintain a perfectly flat playing surface for any length of time.

The quality of the playing surface doesn't matter unless it has a solid foundation to support it. In the next section, we will look at the construction of the table itself.