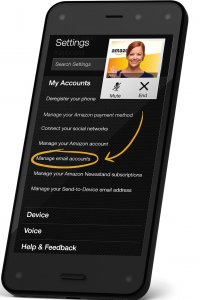 Your Amazon support person can’t see you, but you can see her.
Image courtesy of Amazon.com

One major perk of the phone is Mayday, also available on the Kindle Fire HDX tablet. The virtual Mayday button allows you to get 24/7 live video technical support. You can see and hear an Amazon support person, but they can only hear you. They can talk you through problems and even draw on your screen to point you in the right direction. Amazon's goal for Mayday is a response within 15 seconds, much faster than the average telephone support call pickup. You can use Mayday via WiFi or cellular, but the latter will count toward your data usage.

There are also lots of Amazon Fire Phone functionalities that aren't entirely exclusive to the new device, but also work on some Kindle Fire tablets, Kindle e-readers and in apps on other devices, as well. These include the following:

There are two features that work with the Kindle and Audible apps on multiple devices, including the new Fire Phone, Kindle Fire tablets, certain Kindle e-readers and Android and iOS phones and tablets. Both of the following require that you purchase the e-book and the audio version:

Audible is also owned by Amazon. These reading features will work for about 15,000 titles to start. Anything that says it supports Whispersync for Voice also supports Immersion Reading.