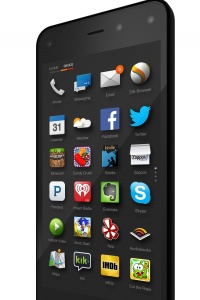 The Fire displays an app grid that looks quite similar to other smartphones.
Image courtesy of Amazon.com

After years in the e-reader market (with Kindle) and tablet market (with Kindle Fire), Amazon has finally released its own smartphone: the Amazon Fire phone. In many ways, including appearance and functionality, it is similar to other popular smartphones already available.

However, Amazon has added some unique features that might be killer apps to some consumers weighing which smartphone to purchase. One of the new features is Dynamic Perspective, which tracks your head and device movements to help simulate 3-D views and provide gesture-based navigation. Another is a 24/7 video support feature called Mayday.

And probably the most remarkable is Firefly, which allows you to scan physical items with the phone's camera, or audio with the microphone, to bring up information about whatever you're scanning, and give action options, including the ability to purchase the item if it's available. Throughout the phone, but especially with Firefly, they've managed to bake in the ability to find and purchase items from Amazon with great ease. To add incentive to buy stuff, for a limited time it also comes with a free year of Amazon Prime membership.

But Amazon Fire phone is more than a pocket purchasing machine. Read on to find out about the impressive technology built into this new device.