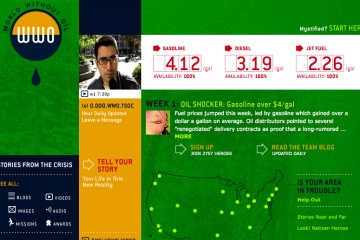 Alternate reality games can help people imagine a scary future -- and how to avoid it.
worldwithoutoil.org

So far we've talked about ARGs created to publicize films and video games. And while this is where the phenomenon got its start, fans of the new experience quickly realized that it could take other forms for other purposes. Some people, like Dave Szulborski, the author of "This is Not a Game: A Guide to Alternate Reality Gaming," have independently created ARGs for the sheer fun of it. Acting as Puppetmasters, they've successfully drawn players from around the world into their intriguing, interactive plots.

Others have seized on the educational potential of ARGs to create a subgenre known as "serious ARGs." One of the best examples of this is "World Without Oil" (WWO). WWO started April 30, 2007, with a news brief proclaiming the beginning of an oil crisis. Updated daily, the game simulated a worldwide oil crisis happening in real time, for 32 days, until it came to an end on June 1.

Commissioned by a not-for-profit San Francisco media company called ITVS, and funded by the Corporation for Public Broadcasting, WWO established a "citizen nerve center" where players could read the day's "news," which provided a realistic version of what could happen on a large scale during a global oil shock. The site established the day's price of oil as demand steadily rose to 5 percent above available supply. The tagline of WWO was, "Play it before you live it."

To enter the game, players simply had to imagine what it would be like to live through the experience day-to-day and create stories, blog entries, social media posts, videos or how-to manuals and send them in. The Puppetmasters would then link to them, creating a networked account of the "crisis" on multiple platforms.

The basic idea behind WWO was to see whether the interactive and immersive qualities of ARGs could be harnessed to crowd-source solutions to imminent real-world problems. By the time WWO was over, it had amassed the imagined experiences of 1,500 people. In total, 68,000 users immersed themselves in the experience during the game period, and 110,000 viewed it by the end of 2007.

Many of the players reported that playing the game had changed their lives beyond the game. The process of immersing themselves in the experience made them think so deeply about what it would be like to live in a world without oil that they began the process of trying to reduce their dependency before such an event occurs [source: WWO]. Perhaps this innovative creation offers at least one way forward for the remarkable immersive and interactive experience known as Alternate Reality Gaming.

In 2008, the British Red Cross launched an ARG designed to get players inside the experience of wartime displacement in Uganda. "Traces of Hope" followed a teenage boy who fled conflict and found his way to a camp for others in the same situation. There he hunted for news of his mother's whereabouts. The game's Puppetmasters left clues and solutions scattered across the internet, and players were invited to help the teenager in his quest [source: BBC].

I remember reading "The Most Dangerous Game" when I was about 12 and being completely taken in by it. A big-game hunter named Rainsford accidentally falls off a yacht and manages to swim to an island where he meets a Russian aristocrat who also happens to be a hunter. The bored Russian forces Rainsford to become his prey and gives him a three-hour head-start. If Rainsford can survive for three days, he wins. If caught, he'll be killed like every other prey. Now that's what I call an immersive alternate reality game!