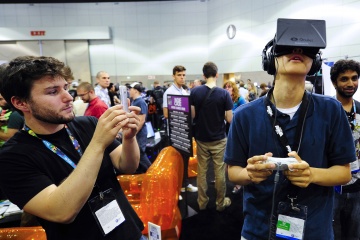 The Oculus Rift in use during E3 in Los Angeles, Calif. in June 2013.
© GUS RUELAS/Reuters/Corbis

Virtual reality (VR) has not only been the stuff of science fiction novels and movies for decades, but it's also been an actual thing -- sort of. The first VR headsets were produced in the 1960s. At the time, the technology took up a lot of room and cost massive amounts of money. In the late 1980s to 1990s, VR became accessible to general public in arcades and other amusement venues via heavy headsets and controllers used to play rather simple games -- such as swinging a pretend sword at virtual foes, with as much accuracy as the era's computing systems could muster. The head tracking was slow, the field of vision was narrow and the graphics were low-resolution by modern standards. The experience often induced headaches and motion sickness, and it wasn't all that immersive. Still, it was a step forward in gaming and was bound to get better, but it didn't catch on at the time and the industry fizzled. The necessary technology just wasn't out yet to make it compelling to the masses.

High-end VR headsets with better resolution and response time have been developed since then, but they've remained prohibitively expensive for the home user and still tend to inhabit places like government and corporate research and training facilities. The military, automotive industry, space program and medical fields, to name a few, all use VR in one way or another, out of the view of the general populace.

But technology is ever evolving, and the small and powerful components that have made our cell phones and gaming systems so much better have now given VR technology a new lease on life by making devices like the Oculus Rift possible. It's the first of several headsets poised to bring realistic VR into the realm of possibility for the average user.

You would expect such a marvel to come from a known electronics manufacturer, but Oculus Rift had a humbler beginning. Palmer Luckey, a teenage gaming and electronics enthusiast with a passion for VR, began collecting old headsets and tinkering to try to create something that would work with modern games. Eventually he realized there was nothing viable in existence, and he'd have to make his own device from scratch.