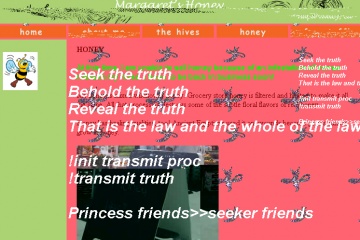 Believe it or not, ilovebees.com was tied to video game Halo 2.
Dragonclaws/Halo Wikia

While "The Beast" remains one of the earliest and best known alternate reality games, there have been a number of notable ARGs since. Perhaps one of the best examples is the game concocted to help launch the videogame "Halo 2."

Once again, it all started at the movies. Among the previews played for audiences in theaters during the summer of 2004 was a trailer for "Halo 2." Those paying attention noticed something weird about the website listed at the end of the trailer, which appeared to briefly spell out "http://ilovebees.com" before reverting to a "Halo 2" web address.

At the same time, across the country administrators of popular gaming sites were getting strange packages in the mail. The packages contained jars of honey with letters suspended inside. The letters spelled out "I love bees." When the package recipients and curious audience members pursued these clues, they came across a website that seemed to have been hacked. Following a message there, they arrived at a blog run by a girl named Dana Awbrey.

In her blog, Awbrey explained she'd created the website for her Aunt Margaret but then it had been hacked. She asked if anyone could help out. The website, it turned out, had been possessed by an amnesiac artificial intelligence from the future. Eventually the ilovebees site included a countdown to an imminent invasion of Earth by a force called The Covenant. The invasion date was actually the launch date for "Halo 2."

On the "Links" page of the site, a series of GPS coordinates appeared. Following the coordinates, the players found themselves in front of payphones. On a specified date at a designated time, the payphones began ringing. Those who answered them heard a voice recording from the artificial intelligence, which asked them a series of questions about itself. Correct answers led to the next phases of the increasingly complex game [source: Halopedia].

At the end of the game, all players received invitations to attend a "training mission." This was, in fact, an opportunity to play "Halo 2" before its official release. From start to finish, "Halo 2" was both a successful ARG and a clever marketing ploy that is said to have engaged many thousands of players and, through them, advertised the product to roughly a million people [source: Szulborski].