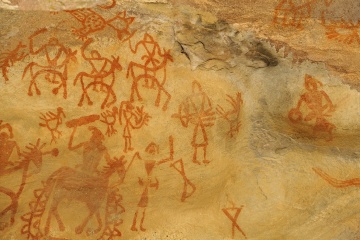 Few activities bespeak the 21st century more convincingly than alternate reality gaming. Yet everything has an antecedent. Where did ARGs come from? Maybe the seeds of ARGs can be found at the very beginnings of humanity? Tens of thousands of years ago when Paleolithic artists created the paintings now found in caves in southern Europe, what they made could be called an alternate reality. Step inside the cave and you were in a different world.

More recently, some works of fiction like Laurence Sterne's discursive 18th-century novel "Tristram Shandy," James Joyce's "Finnegan's Wake," Jorge Luis Borges' "Garden of the Forking Paths" and Julio Cortazar's "Hopscotch" have sought to fashion fictive environments that invite readers to interact with the text by reading them in nonlinear ways.

Advancing through the 20th century, Ray Bradbury's sci-fi story "Veldt" actually depicts the playing of a game that closely resembles an ARG. "Neuromancer" and other works by William Gibson also mine this vein.

But it's with Kit Williams' "Masquerade" that we see an actual proto-ARG in action. Published in 1979, "Masquerade" is an intricately wrought children's fable that contains clues to a hunt for a location in the real world, in which was hidden a beautiful, handmade golden rabbit. Whoever could decipher the clues contained in the book and find the treasure first, could keep it. Add the internet to this scenario, and you have a classic ARG.

Then comes "Ong's Hat: Incunabula." The online interactive mystery's roots go back to 1988, when it first began appearing in cyber-science fiction magazines before migrating to the growing medium of the internet.

In 1994, a game called "Publius Enigma" surfaced in association with the release of the Pink Floyd album "The Division Bell." Using online messaging and the lighting at Pink Floyd's concerts themselves as clues, the game had many of the hallmarks of an early ARG.

Finally, when the marketing campaign for "A.I.: Artificial Intelligence" first began disseminating the ARG that became known as "The Beast" in 2001, alternate reality gaming was fully realized as new phenomenon [source: Szulborski].