How does Zune compare to iPod? 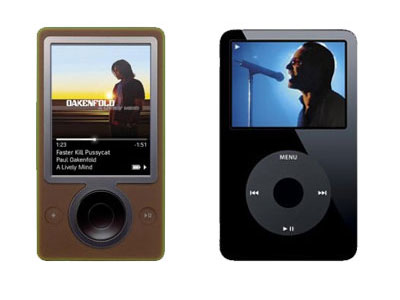 ­For decades, iPod has dominated the mobile media market. OK, it's actually only been about nine years, but Microsoft has stepped into a world so completely ruled by Apple that Zune would pretty much have to unfold into a portable movie theater with reclining seats and free popcorn to really compete. It doesn't do that.

If you've read How iPods Work, you know all about the device. In short, the latest version of the iPod is a digital media player that can handle music, photos, podcasts, video, apps, games and with the flip of a setting, any file type at all in its portable-hard-drive mode. Its form factor is unfathomably compact, third-party programmers have developed all sorts of sweet hacks to expand and change its functionality, it's seamlessly integrated with the most popular media-download store in the world, and it works with Mac OS X and Windows XP/2000 or later.

So how does Zune HD stack up against the iPod touch? The general opinion is that Microsoft did all right, but maybe not quite enough to counter Apple's dominant grip on the MP3 player market.

The Zune HD also comes up wanting in a few other departments, including battery life. Apple claims the iPod touch can play music for up to 40 hours without recharging. Microsoft's Zune HD is rated for 33 hours of music before you'll have to plug it in.

See the next page to learn more about Zune music.

While the Zune store may not have the same vast library as the iTunes store, it does offer a subscription service that iTunes doesn't: $15 a month to download everything you want. It's called the Zune Pass -- you can keep everything you download as long as the Pass is active. Once you let the Pass lapse, you lose the content you've downloaded. Microsoft also allows you to download and keep 10 songs per month while you have a Zune Pass.

Microsoft's Zune holds its own in the media-player world. But iPod is the product of Apple's single-minded dedication, and it shows. It looks sleeker, it's lighter, slimmer and smaller. The iPod is taller and wider than the Zune HD but it's more than 1.5 millimeters thinner than Microsoft's mp3 player. The iPod supports Windows, but Zune doesn't support Mac OS X. Apple's FairPlay DRM scheme, while far from perfect and arguably not all that fair, is play-oriented, not time-oriented, which most people see as a more logical way to track and limit usage. The Zune Pass is a time-oriented digital rights management (DRM) scheme, while Apple abandoned the FairPlay DRM strategy in favor of DRM-free music.

Both the Zune HD store and iTunes allow users to purchase television shows, movies and music videos in addition to music. You can subscribe to podcasts using either store. And both have social networking elements: Microsoft calls its implementation The Social, while Apple has Ping. These integrated social networking features allow users to share their musical tastes and habits with friends and followers. Microsoft gets the edge here -- if you have a Zune Pass, you can stream music on your friends' social profiles to your device. It's an innovative way to discover new music.

Making playlists has become an art in of itself. Apple has iTunes Genius, a feature that can create playlists from your existing music and suggest new songs that you might like based upon what you already listen to. Microsoft calls its version the Smart DJ. It too can create custom playlists automatically. If you have the Zune Pass, Smart DJ can create a streaming playlist for your device based off an album, artist or song title.

The iTunes Store is such a tremendous plus for the iPod, it's hard to give it its due props. Not only does it offer an exceptionally broad range of media, but its payment methods are more straightforward than the Zune Store's. For Zune, you need to purchase chunks of points, and points don't match up to dollar amounts. For some reason, 79 points is the equivalent of 99 cents, which is the cost of a song at both stores. Both players automatically sync with their media-player software to download purchased songs.

The Zune HD faces some tough competition. The HD Radio tuner in the Zune HD may not be enough to tempt customers from choosing the iPod touch. And Apple has other iPod models aimed at other users: the Shuffle and Nano models are small mp3 players that have clips on them so that users can attach the devices to clothing. The iPod Classic can hold 120 gigabytes of data. But for people who don't like iTunes, the Zune HD's interface and lower price point may be just what they're looking for.

For more information on Zune, iPod and related topics, see the next page.