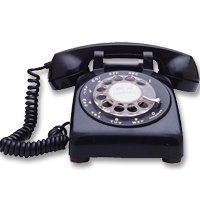 Telephones are actually one of the simplest devices in your house.
Howstuffworks.com

Although most of us take it completely for granted, the telephone you have in your house is one of the most amazing devices ever created. If you want to talk to someone, all you have to do is pick up the phone and dial a few digits. You are instantly connected to that person, and you can have a two-way conversation.

The telephone network extends worldwide, so you can reach nearly anyone on the planet. When you compare that to the state of the world just 100 years ago, when it might have taken several weeks to get a one-way written message to someone, you realize just how amazing the telephone is!

Surprisingly, a telephone is one of the simplest devices you have in your house. It is so simple because the telephone connection to your house has not changed in nearly a century. If you have an antique phone from the 1920s, you could connect it to the wall jack in your house and it would work fine!

In this article, we will look at the telephone device that you have in your house as well as the telephone network it connects to so you can make and receive calls. See the next page to get started.

The very simplest working telephone would look like this inside.

As you can see, it only contains three parts and they are all simple:

That's it! You can dial this simple phone by rapidly tapping the hook switch -- all telephone switches still recognize "pulse dialing." If you pick the phone up and rapidly tap the switch hook four times, the phone company's switch will understand that you have dialed a "4."

The only problem with the phone shown above is that when you talk, you will hear your voice through the speaker.

Most people find that annoying, so any "real" phone contains a device called a duplex coil or something functionally equivalent to block the sound of your own voice from reaching your ear. A modern telephone also includes a bell so it can ring and a touch-tone keypad and frequency generator. A "real" phone looks like this.

Still, it's pretty simple. In a modern phone there is an electronic microphone, amplifier and circuit to replace the carbon granules and loading coil. The mechanical bell is often replaced by a speaker and a circuit to generate a pleasant ringing tone. But a regular $6.95 telephone remains one of the simplest devices ever.

The telephone network starts in your house. A pair of copper wires runs from a box at the road to a box (often called an entrance bridge) at your house. From there, the pair of wires is connected to each phone jack in your house (usually using red and green wires). If your house has two phone lines, then two separate pairs of copper wires run from the road to your house. The second pair is usually colored yellow and black inside your house. (See What do the little boxes that the phone company has around our neighborhood do? for a description of the telephone boxes and wires that you see by the road.)

Along the road runs a thick cable packed with 100 or more copper pairs. Depending on where you are located, this thick cable will run directly to the phone company's switch in your area or it will run to a box about the size of a refrigerator that acts as a digital concentrator.

The concentrator digitizes your voice at a sample rate of 8,000 samples per second and 8-bit resolution (see How Analog and Digital Recording Works for information on digitizing sounds). It then combines your voice with dozens of others and sends them all down a single wire (usually a coax cable or a fiber-optic cable) to the phone company office. Either way, your line connects into a line card at the switch so you can hear the dial tone when you pick up your phone.

If you are calling someone connected to the same office, then the switch simply creates a loop between your phone and the phone of the person you called. If it's a long-distance call, then your voice is digitized and combined with millions of other voices on the long-distance network. Your voice normally travels over a fiber-optic line to the office of the receiving party, but it may also be transmitted by satellite or by microwave towers. (See How does a long-distance call work? for a more detailed description.)

You know the hand crank on those old-fashioned telephones? It was used to generate the ring-signal AC wave and sound the bell at the other end!

Creating Your Own Telephone Network

Not only is a telephone a simple device, but the connection between you and the phone company is even simpler. In fact, you can easily create your own intercom system using two telephones, a 9-volt battery (or some other simple power supply) and a 300-ohm resistor that you can get for a dollar at Radio Shack. You can wire it up like this:

Your connection to the phone company consists of two copper wires. Usually they are red and green. The green wire is common, and the red wire supplies your phone with 6 to 12 volts DC at about 30 milliamps. If you think about a simple carbon granule microphone, all it is doing is modulating that current (letting more or less current through depending on how the sound waves compress and relax the granules), and the speaker at the other end "plays" that modulated signal. That's all there is to it!

The easiest way to wire up a private intercom like this is to go to a hardware or discount store and buy a 100-foot phone cord. Cut it, strip the wires and hook in the battery and resistor as shown. (Most cheap phone cords contain only two wires, but if the one you buy happens to have four, then use the center two.) When two people pick up the phones together, they can talk to each other just fine. This sort of arrangement will work at distances of up to several miles apart.

The only thing your little intercom cannot do is ring the phone to tell the person at the other end to pick up. The "ring" signal is a 90-volt AC wave at 20 hertz (Hz).

Above each jack was a small light. A large battery supplied current through a resistor to each wire pair (in the same way you saw in the previous section). When someone picked up the handset on his or her telephone, the hook switch would complete the circuit and let current flow through wires between the house and the office. This would light the light bulb above that person's jack on the switchboard. The operator would connect his/her headset into that jack and ask who the person would like to talk to. The operator would then send a ring signal to the receiving party and wait for the party to pick up the phone. Once the receiving party picked up, the operator would connect the two people together in exactly the same way the simple intercom is connected! It is that simple!

In a modern phone system, the operator has been replaced by an electronic switch. When you pick up the phone, the switch senses the completion of your loop and it plays a dial tone sound so you know that the switch and your phone are working. (For more information on tones, see How Guitars Work.) The dial tone sound is simply a combination of 350-hertz tone and a 440-hertz tone, and it sounds like this.

You then dial the number using a touch-tone keypad. The different dialing sounds are made of pairs of tones:

A typical number that you dial sounds like this:

In order to allow more long-distance calls to be transmitted, the frequencies transmitted are limited to a bandwidth of about 3,000 hertz. All of the frequencies in your voice below 400 hertz and above 3,400 hertz are eliminated. That's why someone's voice on a phone has a distinctive sound. Compare these two voices:

You can prove that this sort of filtering actually happens by using the following sound files:

For lots more information on telephones, telephone networks and related technologies, check out the links on the next page.

4 Reasons Your Phone Keeps Dropping Calls
Put Those Phones Down, Concertgoers, or Apple May Do It for You
Can you charge your cell phone with a fuel cell?