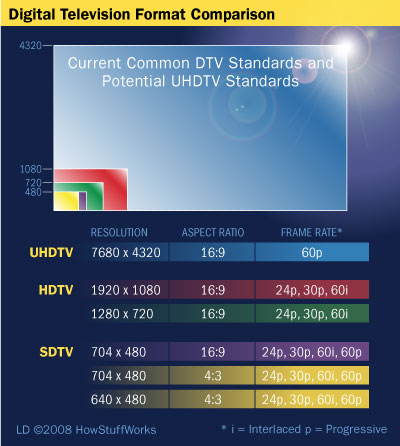 In order to better understand UHDTV, let's examine the details and discover the differences between it and HDTV. Here's a general breakdown of the standard television formats and their pixel power. For a closer look, read How HDTV Works.

We'll get into HDTV vs. UHDTV in a moment, but let's first examine the basic terms regarding television:

The plan is that ultra-high definition TVs will have 16 times the resolution of anything we currently have now in high definition. It'll be more than twice the resolution of 70 millimeter film, a commonly used format for IMAX movies [source: Hamasaki]. The projected images will be crammed with 32 million pixels, compared to the current HD experience that displays about two million pixels. With these huge numbers, not only is the image resolution exceptionally rich, the screen ends up being quite large. Developers expect the consumer versions will be between about 100 and 200 inches (254 and 508 centimeters) in size. Commercial versions -- possibly used for educational, security and advertising purposes at sporting events, art shows and museums -- would be more along the lines of about 350 to 600 inches (889 to 1,524 centimeters).

Despite the differences in resolution and frame rate, the current plan is to retain HDTV's aspect ratio of 16:9, as opposed to choosing a new one like IMAX developers did. This will help keep the new equipment compatible with HDTV broadcasts. Researchers believe that a wide viewing angle increases the sensation of immersion, although they also recognize the drawbacks that can come with a too-wide, too-realistic depiction of images. Studies into these phenomenon are being conducted to help guide UHDTV's development. For example, researchers examine the sensation of presence according to the width of the screen and the optimum angle and distance from which to view it.

Ultra-high definition images could also have a few drawbacks that researchers are trying to solve. For example, someone watching UHDTV might experience symptoms such as motion sickness depending on the stability of the image, the amount of visual stimuli and the visual angles he or she is viewing the TV at. On the production end of the process, Hollywood has already had to adjust to HDTV's unforgiving detailed image (the technology can magnify any wrinkles, pimples and facial imperfections) -- imagine the challenges make-up artists face if UHDTV becomes a mainstream format for movie viewing.

­Though we've delved a little deeper into the world of ultra-high definition TV, there's still super-advanced, high-tech goodness to learn about. Continue to the next page for an inside look at the cutting-edge mechanics of UHDTV technology.

Pump Up the Volume

NHK engineers are also developing an advanced audio system that will accompany a UHD visual broadcast, and the technology puts the Dolby 5.1 speaker system to shame -- try 22.2 on for size! A 3-D, surround sound experience is created by placing a bank of nine speakers on the upper level of the viewing room, with 10 running along the middle. The lowest level of speakers will be made up of three speakers. Two additional speakers (the .2 part of the 22.2 multichannel audio system) will be emitting audio for low-frequency special effects.