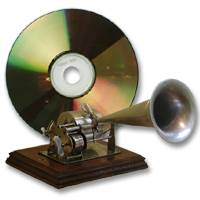 When CDs were first introduced in the early 1980s, their single purpose in life was to hold music in a digital format. In order to understand how a CD works, you need to first understand how digital recording and playback works and the difference between analog and digital technologies.

In this article, we will examine analog and digital recording so that you have a complete understanding of the difference between the two techniques.

In the Beginning: Etching Tin

Thomas Edison is credited with creating the first device for recording and playing back sounds in 1877. His approach used a very simple mechanism to store an analog wave mechanically. In Edison's original phonograph, a diaphragm directly controlled a needle, and the needle scratched an analog signal onto a tinfoil cylinder:

This system was improved by Emil Berliner in 1887 to produce the gramophone, which is also a purely mechanical device using a needle and diaphragm. The gramophone's major improvement was the use of flat records with a spiral groove, making mass production of the records easy. The modern phonograph works the same way, but the signals read by the needle are amplified electronically rather than directly vibrating a mechanical diaphragm.

What is it that the needle in Edison's phonograph is scratching onto the tin cylinder? It is an analog wave representing the vibrations created by your voice. For example, here is a graph showing the analog wave created by saying the word "hello":

This waveform was recorded electronically rather than on tinfoil, but the principle is the same. What this graph is showing is, essentially, the position of the microphone's diaphragm (Y axis) over time (X axis). The vibrations are very quick -- the diaphragm is vibrating on the order of 1,000 oscillations per second. This is the sort of wave scratched onto the tinfoil in Edison's device. Notice that the waveform for the word "hello" is fairly complex. A pure tone is simply a sine wave vibrating at a certain frequency, like this 500-hertz wave (500 hertz = 500 oscillations per second):

You can see that the storage and playback of an analog wave can be very simple -- scratching onto tin is certainly a direct and straightforward approach. The problem with the simple approach is that the fidelity is not very good. For example, when you use Edison's phonograph, there is a lot of scratchy noise stored with the intended signal, and the signal is distorted in several different ways. Also, if you play a phonograph repeatedly, eventually it will wear out -- when the needle passes over the groove it changes it slightly (and eventually erases it).

In a CD (and any other digital recording technology), the goal is to create a recording with very high fidelity (very high similarity between the original signal and the reproduced signal) and perfect reproduction (the recording sounds the same every single time you play it no matter how many times you play it).

You can understand why CDs have such high fidelity if you understand the analog-to-digital conversion process better. Let's say you have a sound wave, and you wish to sample it with an ADC. Here is a typical wave (assume here that each tick on the horizontal axis represents one-thousandth of a second):

When you sample the wave with an analog-to-digital converter, you have control over two variables:

In the following figure, let's assume that the sampling rate is 1,000 per second and the precision is 10:

The green rectangles represent samples. Every one-thousandth of a second, the ADC looks at the wave and picks the closest number between 0 and 9. The number chosen is shown along the bottom of the figure. These numbers are a digital representation of the original wave. When the DAC recreates the wave from these numbers, you get the blue line shown in the following figure:

You can see that the blue line lost quite a bit of the detail originally found in the red line, and that means the fidelity of the reproduced wave is not very good. This is the sampling error. You reduce sampling error by increasing both the sampling rate and the precision. In the following figure, both the rate and the precision have been improved by a factor of 2 (20 gradations at a rate of 2,000 samples per second):

In the following figure, the rate and the precision have been doubled again (40 gradations at 4,000 samples per second):

You can see that as the rate and precision increase, the fidelity (the similarity between the original wave and the DAC's output) improves. In the case of CD sound, fidelity is an important goal, so the sampling rate is 44,100 samples per second and the number of gradations is 65,536. At this level, the output of the DAC so closely matches the original waveform that the sound is essentially "perfect" to most human ears.

One thing about the CD's sampling rate and precision is that it produces a lot of data. On a CD, the digital numbers produced by the ADC are stored as bytes, and it takes 2 bytes to represent 65,536 gradations. There are two sound streams being recorded (one for each of the speakers on a stereo system). A CD can store up to 74 minutes of music, so the total amount of digital data that must be stored on a CD is:

That is a lot of bytes! To store that many bytes on a cheap piece of plastic that is tough enough to survive the abuse most people put a CD through is no small task, especially when you consider that the first CDs came out in 1980. Read How CDs Work for the complete story!

For more information on analog/digital technology and related topics, check out the links on the next page.

How does the electron gun inside a TV work, and why is it called an "electron gun"?
Top 5 Entry-level HDTVs
Top 10 Digital Home Tips