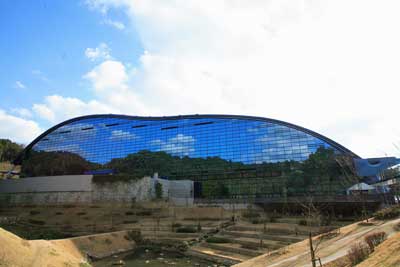 Ultra-high definition has already been put to use in at least one commercial venue. Theater 4000 was built in October 2005 at the Kyushu National Museum in Japan.
Eriko Koga/The Image Bank/Getty Images

Just when you thought your TV was state-of-the-art, something bigger (and possibly better) is coming along. Engineers are working to develop technology that goes far beyond the capabilities of current broadcasting systems, hardware and household electronics such as TVs and video cameras.

NHK first got involved with HDTV technology back in 1964 [source: Heingartner]. Thirty-one years later and studies concerning ultra-high definition TV began to take form. In 2002, NHK engineers put on the first public demo of a prototype ultra-high definition video system, and from there, the research continued. Researchers are working to improve the quality of the UHDTV system, software and equipment, because all this technology must be developed and built from scratch. Let's put it this way -- think about the far-spanning innovations needed to make cell phones a reality out of their predecessor, the rotary phone.

Some of the experiments the technicians are doing include devising ways to perfect the image appearance, speed signal transfer rates and create the optimum viewing experience. NHK's goal is to begin producing experimental satellite broadcasts in 2015, and have the technology ready to roll in Japan by 2025. So far they have had a number of demonstrations, installations and live relay experiments, like the one from Kamogawa Sea World to NHK lab headquarters.

But before we get into the technical details, let's talk more about how NHK engineers went about developing this technology and the challenges they faced. For example, it's all well and good to build a projector that can display UHDTV, but where do you get an ultra-high definition image from in the first place? You've certainly never seen an image like that on your home television screen, through your video camera or even at the movie theater. In other words, NHK also needed to develop a camera, a camera control unit and other equipment that would record and process ultra-high definition video images.

Then there's the signal transmission. We're talking about an extremely data-laden video signal here, so strategies for handling large volumes of information became a central concern of the technology's development. Transmission can also encompass a couple of different necessities. For example, transmission could take place from where the images and sounds are recorded to where they're viewed, like in the case of live TV. Or, the signals could be transmitted from where they're filmed to where they're stored, like in the case of movies or standard broadcast television. Researchers also needed to develop equipment and programs that could encode, compress and store these vast amounts of data.

Now that we've had a closer look at the plans for this TV technology and read about the work that's going into developing UHDTV, are we ready to see the big picture? Click to the next page for the scoop.

Silence on the Airwaves

Come June 12, 2009, all analog TV broadcasts will permanently go silent in the United States. Digital TV will make room for other uses of the broadcast spectrum, provide improved picture and sound quality and allow broadcasters to deliver a larger number of channels on their allotted bandwidth. Visit the FCC's Digital TV Transition Web site for more details.