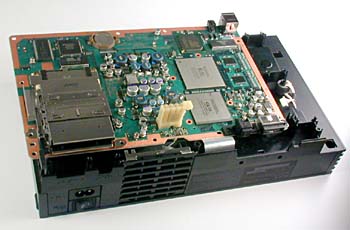 View of the Emotion Engine and Graphic Synthesizer processors

Let's take a look at the components inside a PlayStation 2 console, and what their capabilities are. (Check out How Video Game Systems Work first for a general introduction to game consoles.)

Drive bay (for hard disk or network interface) Other features:

Like the original PlayStation, the CPU in the PS2 is a RISC processor. RISC stands for reduced instruction set computer, and means that the instructions and computations performed by the processor are simpler and fewer. Also, RISC chips are superscalar -- they can perform multiple instructions at the same time. This combination of capabilities, performing multiple instructions simultaneously and completing each instruction faster because it is simpler, allows the CPU to perform better than many chips with a much faster clock speed.

The incredible amount of heat generated by the processors requires this huge heat sink.

The floating point unit (FPU) is a special processor that is dedicated to handling complex mathematical equations, particularly those that include non-integers, numbers after the decimal point. These calculations are commonly referred to as floating point operations because the decimal point can move, or float, depending on the outcome of the calculation. The complexity of such numbers can create a tremendous bottleneck if the main processor has to take the time to perform each calculation. To alleviate this, the non-integer numbers are sent to the FPU.

The PS2 has several hardware effects that are handled by the Graphics Synthesizer. They include an alpha channel, Bezier surfacing, perspective correction and mip mapping.

The PS2 uses the alpha channel to add transparency effects to an object. This is a special graphics mode used by digital video, animation and video games to achieve certain looks.

Bezier surfacing is a 3-D modeling process that calculates how many polygons are needed to create an object. It bases the number on the level of detail necessary to make the object appear to be smooth to the viewer. The PS2 only performs these calculations on Bezier-surfaced objects that are in the game. Perspective correction makes the texture map resize at the same rate as the object that it is mapped on.

Mip mapping is a cool process. It is a form of texture mapping whereby different sizes of each texture map are made. In essence, the processor replaces the appearance of an object with a more detailed image as you move closer to the object in the game. Let's take a look at how the PS2 uses these maps in trilinear mip mapping:

The goal is to use the smallest texture map possible given the distance that the object is from the viewer. The smaller the texture map, the lower the processing load. On nearby objects, however, small texture maps create a grainy surface that looks bad, so larger texture maps are used there.