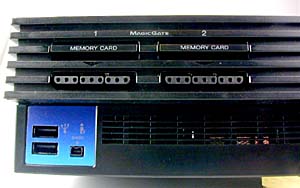 The PlayStation 2 has two USB ports and a FireWire port.

In 1988, Sony entered into an agreement with Nintendo to develop a CD-ROM attachment, known as the Super Disc, for the soon-to-be released Super Nintendo. Due to many contractual and licensing problems, the Super Disc was never released. Instead, a modified version was introduced by Sony in 1991, as part of a system called the Play Station.

The Play Station read Super Discs, special interactive CDs based on technology developed by Sony and Phillips called CD-ROM/XA. This extension of the CD-ROM format allowed audio, video and computer data to be accessed simultaneously by the processor. The Play Station also read audio CDs and had a cartridge port for accepting Super Nintendo game cartridges. The original Play Station was envisioned as the core of a home multimedia center. Sony only manufactured about 200 of them before deciding to retool the design.

The new design, dubbed the PlayStation X, or PSX, dropped the Super Nintendo cartridge port and focused solely on CD-ROM-based games. The component hardware inside the console was revamped as well to ensure an immersing and responsive gaming experience. Launched in Japan in December of 1994, and in the United States and Europe in September of 1995, the PlayStation quickly became the most popular system available.