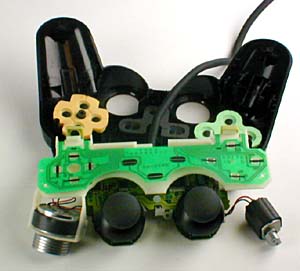 The controller is the primary user interface for the PlayStation 2. With its winged shape, analog controls and abundance of well-positioned buttons, it is easy to use yet powerful.

The standard PS2 controller has 15 buttons; all of them, except for Analog, Start and Select are analog. They include:

Although each button can be configured to perform a specific and distinctive action, they all work on the same principle. Each button has a tiny curved disk attached to its bottom. This disk is very conductive. When the button is depressed, the disk is pushed against a thin conductive strip mounted on the controller's circuit board. If the button is pressed lightly, the bottom part of the curved disk is all that touches the strip, increasing the level of conductivity slightly. As the button is pressed harder, more of the disk comes into contact with the strip, gradually increasing the level of conductivity. This varying degree of conductivity makes the buttons pressure-sensitive!

PS2 controllers also have two analog joysticks. These joysticks work in a completely different way from the buttons described above. Two potentiometers, variable resistors, are positioned at right angles to each other below the joystick. Current flows constantly through each one, but the amount of current is determined by the amount of resistance. Resistance is increased or decreased based on the position of the joystick. By monitoring the output of each potentiometer, the PS2 can determine the exact angle at which the joystick is being held, and trigger the appropriate response. In games that support them, analog features such as these allow for amazing control over gameplay.

Another feature of the Dual Shock 2 controller, actually the reason for its name, is force feedback. This feature provides a tactile stimulation to certain actions in a game. For example, in a racing game, you might feel a jarring vibration as your car slams into the wall.

Force feedback is actually accomplished through the use of a very common device, a simple electric motor. In the Dual Shock 2 controller, two motors are used, one housed in each handgrip. The shaft of each motor holds an unbalanced weight. When power is supplied to the motor, it spins the weight. Because the weight is unbalanced, the motor tries to wobble. But since the motor is securely mounted inside the controller, the wobble translates into a shuddering vibration of the controller itself.