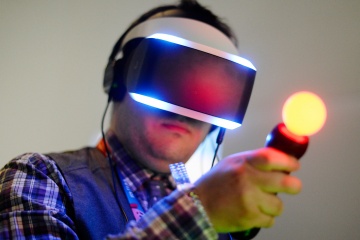 The Morpheus headset can be used in conjunction with the PlayStation Move controllers.
© KEVORK DJANSEZIAN/Reuters/Corbis

The current Project Morpheus prototype is a sleek black and white wearable VR headset. It has a 5-inch (12.7-centimeter) LCD display with 1920 by 1080 pixel (960 by 1080 per eye) resolution, which users will view through special lenses. In order to mimic 3D binocular vision, each eye will see a slightly different rendering of an image at a different angle.

The device provides a 90-degree horizontal field of view for people wearing glasses -- possibly more for others. They have built 15mm to 25mm of eye relief into the headset. It also allows for a wide range of interpupillary distance (IPD).

Several components and peripherals will work together to handle positional tracking and motion control for Project Morpheus. The headset incorporates inertial sensors (gyroscopes and accelerometers) to track head motion and orientation. An external PlayStation Camera (an optional peripheral for PS4 that will be required to use Project Morpheus) will track LEDs all around the device, even on the back of the headset, to keep tabs on the user's position. The device will also work with existing PS Dualshock 4 and PS Move controllers so that PlayStation 4 can track your hands as well as your head. The system allows for six degrees of freedom, has a 3-meter working volume and tracks the position and orientation of the headset with a refresh rate of 1000 Hz.

Project Morpheus also incorporates 3D audio technology that delivers omnidirectional sound by simulating up to 60 virtual speakers so that sounds seem like they're coming from very specific directions all around you. The audio will change accordingly as you move to deliver the most realistically immersive experience possible. The sound is delivered through headphones plugged into an audio jack on the headset. Wireless headphones will also work.

Aside from the headphone jack, the device has HDMI and USB ports and is currently wired with a 5-meter (16.4-foot) cable, although the team will look into making the consumer model wireless. The prototype connects via the wire to a small breakout box, which in turn connects to the PlayStation 4 (and optionally your television). The box includes a USB port, three HDMI ports and a power connector.

The prototype was made with comfort in mind. It was designed so that your head would bear the load without putting weight on your nose, cheeks or other parts of your face. An open-air design allows for airflow to help prevent lens fogging or overheating, but still manages to block light to your eyes to decrease potential distractions. There are various adjustment points on the prototype to make room for different head shapes.

All of the technical specs are tentative and could change in the next version or versions. For the consumer model, they are considering a higher quality OLED display, and they plan to work out any kinks and make it as plug-and-play as possible so that anyone will feel comfortable using it. No firm details for future versions have been released at the time of this writing.