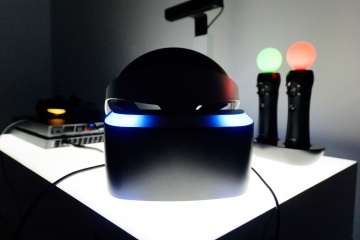 Virtual reality (VR) headsets have been around since the 1960s, and as you would expect, they have evolved and gotten better over the years. But they really haven't caught on as viable consumer products. You may have seen the occasional VR headset in an arcade, and home models have popped up now and again to be snatched up by enthusiasts and then fizzle out, but at the moment, they're more at home in research labs or military training facilities. Despite their continued existence and the obvious cool factor, they haven't become as common as our speculative fiction led us to believe they would have been by now. There are lots of possible reasons, including their low resolution, tendency to cause simulation sickness and the prohibitive cost of the better models.

But conditions have changed. Graphics processing, motion tracking and display technologies, among other things, have all improved vastly since the inception of VR, and everything has gotten smaller and cheaper. We now have far more powerful processors, a myriad of sensors and small high-resolution displays that are bringing consumer VR into the realm of possibility. The release, to much fanfare, of the Oculus Rift VR headset development kit in 2013 has made relatively inexpensive home models seem likely in the near future.

Now a major company is jumping into the VR arena. Sony Computer Entertainment has developed a working VR headset, codenamed Project Morpheus, specifically for the PlayStation 4 gaming system. It's in prototype phase as of this writing, so the specifications, functionality and the name may change once the consumer model is finally out, but it will be no less cool.

Read on to find out from whence this electronic marvel came.