The Return of PSN and the Results of the Hacking Incident 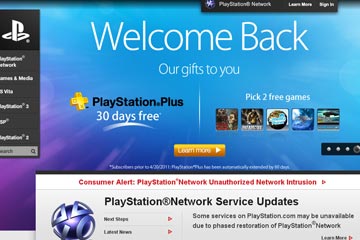 PSN's hacking incident concerned the mainstream media once credit card information entered the picture. And then the United States government got involved: Sony was called before a House of Representatives hearing on "The Threat of Data Theft to American Consumers" [source: PlayStation Blog]. Sony detailed plans to reimburse its users for the damage and inconvenience of the PSN downtime with "complimentary identity theft protection to U.S. account holders and detailed the 'Welcome Back' program that includes free downloads, 30 days of free membership in the PlayStation Plus premium subscription service; 30 days of free service for Music Unlimited subscribers; and extending PlayStation Plus and Music Unlimited subscriptions for the number of days services were unavailable" [source: PlayStation Blog]. Finally, after nearly a month, PlayStation Network began coming back online in stages on May 14, 2011 with system update 3.61. PSN users were required to change their passwords when they logged onto the service for the first time since April 20, 2011.

Those weeks of downtime undoubtedly had far-reaching repercussions. In addition to shaking gamers' faith in Sony's security and making it impossible to play PS3 games online, the online blackout affected sales and brand strength. Several anticipated games that relied on PSN services like "Portal 2" and "SOCOM 4" were crippled. And with many console games being released simultaneously on multiple platforms, some users opted to purchase the Xbox 360 versions, knowing Microsoft's online multiplayer gaming was readily available.

Smaller game developers who relied on the sales of downloable games saw absolutely no income from PSN for nearly a month. Game studio Capcom claimed the downtime had cost it hundreds of thousands if not millions of dollars [source: Capcom]. It's impossible to know the exact ramifications of the hacking incident until Sony discovers who's responsible or gives up the investigation. Sony likely won't reveal how much money it spent rebuilding PSN and investigating the intrusion, but the figure no doubt lies somewhere in the millions of dollars. And that's not counting the money it will spend reimbursing its users. Or the money it will lose going forward as a result of consumer mistrust. After the announcement that PSN user information, and possibly credit card data, had been stolen, Sony's stock fell from $30 to a closing of $27.58 on May 13, 2011 [source: Google Finance]. This incident will hardly spell the end of Sony's game business or foreshadow the PlayStation 3's failure, but it was a major blow for the company and will impact the world of gaming in the years to come.