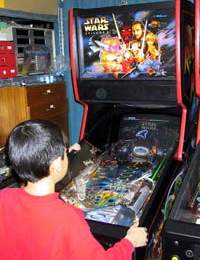 One of the few Pinball 2000 machines to go public.
Photo courtesy Martin Wiest

­T­he pinball industry has fallen on hard times since its heyday in the 1970s and 1980s. At one time, five different companies were making pinball machines. Only one has survived.

One great idea that ended up being shelved was called Pinball 2000. It involved the merging together of video games and pinball machines to form a pinball machine that interacted with "virtual targets" on a video monitor. While it was billed as the future of pinball, it never had a chance to completely flourish. Two games (Revenge from Mars and Star Wars: Episode 1) made it through production, and a third was in development when Williams/Bally shut the doors of its pinball division for good.

The lone survivor of the pinball wars is Stern Pinball, owned by Gary Stern, whose father, Sam Stern, helped begin Williams Electronics in 1947. Stern plans to produce three to four new machines a year, focusing on the 18-to-35-year-old male demographic that is currently engrossed in television and video games in the United States. Pinball is much bigger in European countries than it is in the U.S., and Stern hopes to continue to supply the international market.

For more information on pinball and related topics, check out the links below.