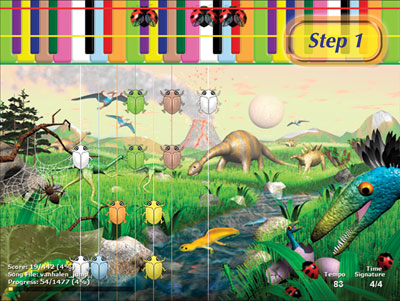 The Piano Wizard system is based on a four-step process that takes you from an absolute beginner to reading real notes on a musical staff.

The most basic level of game play is based on objects and colors, not notes and keys. In this first stage, you start by placing the colored stickers on each key of your keyboard. In step one of the game, you'll see a representation of the same color-coded keyboard at the top of the screen.

When a song begins, color-coded objects such as circles, dinosaur eggs and stars will scroll from the bottom to the top of the screen. The color of the object corresponds with the color of the key to press. When the object reaches the top of the screen, it scrolls over one of the color-coded keys. Your goal as a player is to press the same key on your keyboard at the exact moment that the object passes over the on-screen key. When you press the right keys at the right time in the right sequence, you'll be playing a song.

This is the most basic lesson of Piano Wizard: pitch and timing. Pitch is the frequency of a sound as perceived by the ear. In music theory, we give names to each pitch: a, b, c, d, d-flat, f-sharp and so on. By playing Piano Wizard, you won't learn the names of notes, but you'll become familiar with the idea that different keys produce different pitches or sounds.

In the second step of Piano Wizard, the on-screen keyboard rotates to the left side of the screen. Now the objects scroll from right to left instead of from bottom to top. This is a little trickier to master, because the player's keyboard is still oriented horizontally, but the on-screen keyboard is vertical. But with this vertical orientation, the color-coded objects look more like real notes on a musical staff. In music notation, notes with a higher pitch are higher on the staff. Likewise, in this step of Piano Wizard, notes with a higher pitch are higher up on the screen. Whether the player realizes it or not, he or she's starting to learn the basics of reading music.

By the time you reach step three, the symbols have changed to real musical notes, though they are color-coded.
Courtesy Music Wizard Group

In the third step, the color-coded objects become musical notes on a real staff. Now the transition to reading music is almost complete. The color of the note is still its most important characteristic as far as the player is concerned. But he or she's also becoming comfortable with the look of musical notes on the staff in all of their variations and lengths -- whole notes, quarter notes, eighth notes, sharps and flats.

­ In the fourth step, the colored stickers come off the keyboard and the on-screen notes change from color-coded to black. At this point, the student reads notes exactly how they would be written on a piece of sheet music. The only difference is that the notes continue to scroll across the screen.