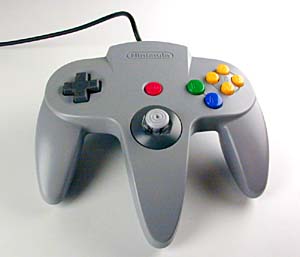 The trident shape of the Nintendo 64 controller is unique among video game systems.

The controller is the primary user interface for the N64. With its trident shape, it is probably the most unusual design for a controller on the market today. The standard N64 controller has 14 buttons plus an analog joystick. The buttons include:

Inside the N64 controller.

Although each button can be configured to perform a specific and distinctive action, they all work on the same principle. In essence, each button is a switch that completes a circuit when it is pressed. A small metal disk beneath the button is pushed into contact with two strips of conductive material on the circuit board inside the controller. While the metal disk is in contact, it conducts electricity between the two strips. The controller senses that the circuit is closed and sends that data to the N64. The CPU compares that data with the instructions in the game software for that button, and triggers the appropriate response. There is also a metal disk under each arm of the directional pad. If you're playing a game in which pushing down on the directional pad causes the character to crouch, a similar string of connections is made from the time you push down on the pad to when the character crouches.

The analog joystick works in a completely different way from the buttons described above. Two wheels are positioned at right angles to each other below the joystick. Whenever the joystick is moved, the two wheels turn slightly. Tiny slots are arranged around the perimeter of each wheel. The wheels are each mounted between an LED (Light Emitting Diode) and a photo cell. Light from the LED, shining through the slots in the wheel on the cell, creates a small amount of current. When the amount of light changes, the level of current changes. By monitoring the output of each photo cell, the N64 can determine the exact angle at which the joystick is being held, and trigger the appropriate response.

Another feature of the N64 controller is the ability to add options via an expansion slot on the bottom of the controller. A popular option is the Rumble Pak, which provides force feedback. This feature provides a tactile stimulation to certain actions in a game. For example, in a racing game, you might feel a jarring vibration as your car slams into the wall.

Force feedback is actually accomplished through the use of a very common device, a simple electric motor. The shaft of the motor holds an unbalanced weight. When power is supplied to the motor, it spins the weight. Because the weight is unbalanced, the motor tries to wobble. But since the motor is securely mounted inside the Rumble Pak, the wobble translates into a shuddering vibration of the controller itself.

You can save games and high scores by using one of the special Flash memory cards. The card is inserted into the slot on the bottom of the N64 controller.

The N64 controller uses only three wires to connect to the console. There's a ground wire, another wire that supplies +3, 6 volts of power, and a third wire that carries all data. The controller sends the information for each button in sequence, and then receives data back from the console.