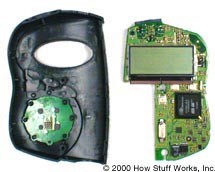 Unlike earlier forms of music players that required moving parts to read encoded data on a tape or CD, MP3 players use solid-state memory. An MP3 player is no more than a data-storage device with an embedded software application that allows users to transfer MP3 files to the player. MP3 players also include utilities for copying music from the radio, CDs, radio or Web sites and the ability to organize and create custom lists of songs in the order you want to hear them. This list of songs is called a playlist.

The MP3 player is the convergence of many technologies. Alone, none of its components are revolutionary, but together they create an unprecedented consumer product.

Specific components may vary, but here are the basic parts of a typical MP3 player:

The player plugs into your computer's USB port, FireWire port or parallel port to transfer data. USB-based players transfer data many times faster than those that use the parallel port. The MP3 files are saved in the player's memory.

With the exception of the last one, these are all types of solid-state memory. The advantage to solid-state memory is that there are no moving parts, which means better reliability and no skips in the music. MP3 players that contain tiny hard disk drives can store 10 to 150 times more than Flash memory devices can.

The microprocessor is the brains of the player. It monitors user input through the playback controls, displays information about the current song on the LCD panel and sends directions to the DSP chip that tells it exactly how to process the audio.

In addition to storing music, the MP3 player must play music and allow the user to hear the songs played. To do this, the player:

All of the portable MP3 players are battery-powered. Most use a rechargeable internal lithium battery and last for approximately 10 to 28 hours on a single charge. Many of the players also have AC adapters so they can be plugged into a normal electrical outlet, and some even offer DC adapters for use in a car.

In the next section, we'll learn about the different types of MP3 players.