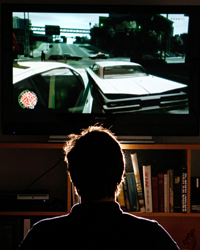 Video gamers enjoy the challenge of playing in an alternate world like that of the "Grand Theft Auto" series.
© Cate Gillon/Getty Images Europe

If you want to design a truly unique game, writing computer code is almost a necessity.

Knowledge of computer code -- how to read and write it -- is very helpful in making video games. Typically, the more advanced the game in terms of performance and graphics, the more advanced the code. Programs for making video games generally work by automatically entering code in response to simple commands. But writing code from scratch, while more cumbersome, usually results in a finer, more customized product.

For example, programs for making video games might give you a few weapons or colors to choose from. But someone who can write code can invent new weapons and create any color in the spectrum. It's sort of the difference between baking a cake from scratch and baking one that comes premixed in a box. The cake that comes from scratch -- assuming the baker is good! -- will have more personality and better flavor.

Software computer code programs a computer at the most basic level. This fine degree of instruction, in properly skilled hands, results in a more masterful control of video game features. And with computer manufacturers adding more power to each new model, video game makers who can use code will have opportunities to create increasingly vivid game worlds.

Video game creators sometimes refer to their chosen code as "the engine" that makes the game run. This code will make the billions of instant calculations needed to make a character fly, run or use a weapon. It will network with other computers and keep the environment running, along with sound effects and musical score.

Video game makers use several codes to create their games. These include C++, Python, Visual Basic and Perl, among others.

These are just some of the software code programs used to create video games like "Grand Theft Auto," "Guitar Hero" and "Mario Kart." The popularity of video games is growing -- it's estimated that at any one time over 1 million U.S. households are playing [source: Nielsen Media].

For lots more information about making video games and related topics, check out the links below.