How to Replace an iPod Battery 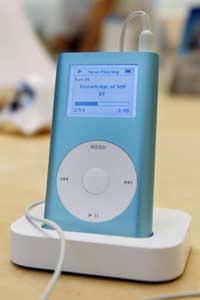 You're halfway through a 5-mile (8.05 kilometer) jog, and you've reached that perfect rhythm between a steady run and a full-on sprint. You spy an upcoming incline and mentally prep for the challenge. To pump yourself up, you select the perfect soundtrack from your iPod playlist: the theme song from "Rocky." As the horns and bass pipe through your ear buds, you feel a slight adrenaline rush as you start the ascent. No longer are you running up a cement suburban road -- you're transported to the steps of the Philadelphia Museum of Art, bounding alongside Sly Stallone.

Suddenly, the music stops. No more pounding beats to help you up the road. Your iPod's battery has run out, leaving you with only the thump of your pounding heart and the rumble of passing cars to cheer you onward.

One good thing about the iPod's lithium-ion battery is that it's rechargeable. Once you get home from that run, your device can be operational in the time it takes to shower and eat a post-jog snack.

­Generally, a new iPod can play continuously for between eight and 12 hours before dying [source: Apple]. Then, in about two hours, an iPod can recharge back to 80 percent capacity in a process called the fast charge. If you have a little more time on your hands, you can leave it plugged in to trickle charge for two more hours and reach 100 percent capacity. Allowing your iPod battery to drain completely and refresh comprises a full charge cycle. According to Apple, that translates to a few weeks of listening power for the average user. Also, lithium-ion batteries can recharge at any point in the cycle without degrading the battery's quality. In other words, recharging your iPod when the battery is only run down halfway won't harm its charging capacity in the long run.­

But as the old saying goes, all good things must come to an end. After about 400 charging cycles, the lithium-ion battery may need replacing. But this isn't as simple as popping in a few D-cells into an old school cassette player. It requires a little more time and money to make the beat go on. 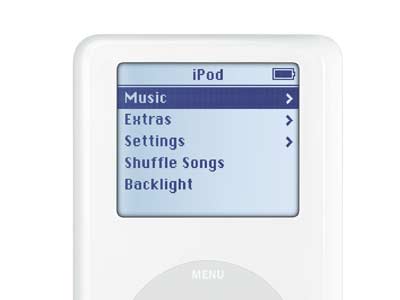 Apple can replace your iPod's battery for around $59.
Getty Images

When the first generation iPod hit stores in 2001, everything was hunky-dory between Apple and its growing legion of ear-bud-sporting fans. Two years and three model generations later, some consumers' love affair with their favorite mp3 device screeched to an abrupt halt. The lithium-ion batteries inside the iPod failed to hold a charge. To make matters worse, the iPod isn't designed to allow users to replace the battery.

The media credited brothers Casey and Van Neistat for publicizing the iPod battery problem in 2003 [source: Musgrove]. Casey bought an iPod in 2002, and its battery gave out the following September. Much to his chagrin, Apple refused to replace the battery in accordance with company policy. He even attempted to reach Apple CEO Steve Jobs about the problem, to no avail [source: Neistat]. Deciding to take to the streets, the Neistat brothers spray painted Apple advertisements with the tagline "iPod's unreplaceable battery lasts only 18 months" [source: Popular Science].

Though not directly because of the guerilla campaign, Apple instituted a battery replacement program in November 2003. Meanwhile, a group of iPod owners filed a class action lawsuit claiming that Apple had misrepresented the gadget's battery life. In 2005, Apple settled and agreed to replace iPods with faulty batteries purchased prior to May 2004 and extend warranties on batteries.

Today, when you buy an iPod, Apple has you covered for the first year. Barring owner-induced damage (i.e. ruining your iPod by dropping it in the toilet), Apple will replace a failing battery free of charge for the first 12 months. After that, you must shell out the cash for a new one.

For about $59 plus shipping and handling (prices vary, depending on model), Apple will replace your iPod battery. You can also take it to an Apple retail store for repair. But the iPod you get back won't be what you had before. Basically, you get a brand new iPod. Why is that important to know? The replacement device includes a new hard drive; anything not backed up on iTunes, such as documents or photos, will be good as gone.

When the initial battery bonanza was in full swing, some clever iPod users decided to chance it. Why not replace the battery on their own and save a few bucks? With mixed results, standard operating procedures now exist for DIY iPod battery replacement. 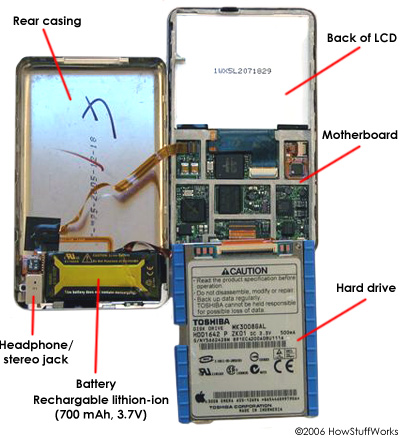 If you open up your iPod to replace the battery yourself, be warned that your warranty will no longer be valid.
HowStuffWorks.com

If you wish to replace your iPod battery on your own, there are a couple of considerations before starting. Technically, playing iPod doctor nullifies a valid warranty [source: Grand]. Also, if you fail to change the battery properly, Apple might not be able to help afterward. Under the terms of the company's battery replacement program, Apple will repair only those iPods with legitimate battery problems. For instance, let's say that you break the motherboard while attempting to remove the battery; Apple won't issue a replacement. Unless a third-party repair business can assist, you'll be out of an iPod.

Getting the appropriate battery isn't hard. Many third-party companies now sell lithium-ion batteries specifically for the various iPod models. They usually run around $30, and some companies offer their own iPod battery replacement services and charge less than Apple.

If you've read How iPods Work, you know that the inside of the device is a bit of an electronic maze. The lithium-ion battery is housed beneath the hard drive. Keeping in mind that replacing your own battery isn't a foolproof process, here are the basic steps:

Initially, the iPod should turn on, signaling a successful replacement. After that, you'll need to charge it.

You can prolong the time until your iPod battery kicks the bucket. Understanding the lithium-ion battery's likes and dislikes can coax extra life out of it. 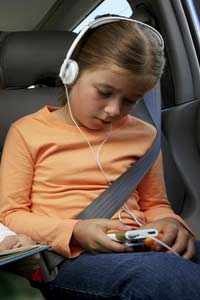 If you want to preserve your iPod's battery life, don't leave it in the car.
Noel Hendrickson/Getty Images

Lithium-ion batteries have allowed manufacturers to design smaller, sleeker devices because they pack­ more power in a compact space. On the flip side, they're expensive and have a relatively brief lifespan -- usually two to three years [source: Musgrove]. And although Apple's iPod catalogue has evolved rapidly, battery capability hasn't followed suit. Following a few tips can help fill this technology gap.

First, don't store iPods in hot places, such as a glove box. The lithium-ion battery creates usable power through chemical reactions; heat excites those particular reactions. Therefore, if you leave your iPod sitting in a steamy car for extended periods of time, it depletes battery life more rapidly than it would otherwise. Although you aren't actively using the gadget, the battery wear and tear will accumulate. For that reason, Apple strongly advises storing iPods in temperate locations with the Hold button engaged.

When using your iPod, limit your use of the following functions [source: Apple]:

Each of these require more battery power to activate.

The way you download and arrange your music also affects battery life. For starters, compressed files (160 kbps mp3s and 128 kbps AACs) eat up less battery power [source: Apple]. The iPod (excluding nano and Shuffle models) delivers that music from the hard drive to a memory cache, or temporary storage unit. The larger the file, the more frequently the iPod must reload its cache; that activity drains the battery. For similar reasons, fast forwarding through a series of songs also depletes the battery. Each time you skip a song, it requires extra energy for the iPod to reload the hard drive.

Fortunately for iPod addicts, part of keeping the lithium-ion battery healthy includes putting it to work. An idle lithium-ion battery will simply drain out if left alone long enough. Likewise, Apple urges customers to run through at least one full battery cycle per month [source: Apple].