How to Build Your Own Arcade Machine From an Old Computer

Deciding on Your Arcade Controllers 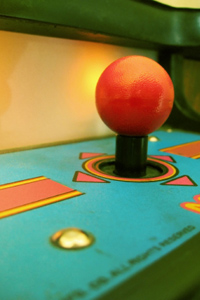 What kind of games do you want to play? Arcade games like Centipede work best with a trackball. The classic game Tempest used a dial-like rotary controller. Several driving games used a combination of a steering wheel and pedals for the gas and brake. And of course, hundreds of games had a combination of joysticks and buttons.

MAME supports many different ­controls. You could install standard game controller ports on the computer you'll be using and hook up standard computer joysticks, steering wheels or gamepads. You can even use game controllers that connect to your computer via USB. MAME doesn't automatically enable the controller function -- you'll have to turn it on either by a line command or through a GUI.

These controllers should work with most games, but they don't necessarily reproduce the feeling of a real arcade machine. For that, you need to go out and buy actual arcade controllers and buttons. Some vendors sell prefabricated game control panels that you can purchase and incorporate into a cabinet. A prefabricated control panel will cost more than the sum of its individual components, but it will save you time when it comes to wiring and encoding your controls. Still, many enthusiasts like the freedom they have when they buy each component separately and design their own game control panels.

Some MAME arcade machine fabricators like to include multiple control devices on a single machine. MAME enthusiast Jeff McClain built what he calls the Ultimate MAME Cabinet and included four joysticks, a spinner control, a trackball, a light gun and more than a dozen buttons in a custom-built cabinet [source: Ultimate MAME Cabinet]. Many vendors sell arcade machine controls -- you should be able to find most standard controls without too much trouble. If you want something specific -- such as the Star Wars flying yoke or Spy Hunter's custom steering wheel -- that might require a bit more effort to seek out.