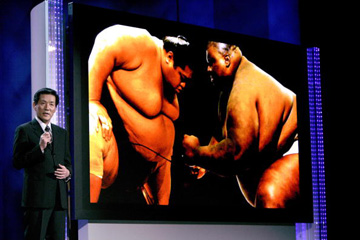 As televisions get larger, like this 150-inch set from Panasonic, you need more pixels to keep the picture nice and sharp.
David Paul Morris/Getty Images

As televisions get bigger, we need more pixels to create a smooth image. For most households, 1080-pixel resolution is probably sufficient. But if you have a mansion and you want a 200-inch (508-centimeter) television screen in your den, 1080 just won't cut it. The sad fact is that even if you get a television with an amazing number of pixels, you may not have any content to watch on it.

In the future, we may see ultra-high definition televisions (UHDTVs). While the peak of HDTV in the United States is 1,080 horizontal lines of pixels, the UHDTV standard may be closer to 4,000 lines. A 200-inch television with 4,000 lines of resolution could provide the clear, smooth images you'd want in a piece of equipment that enormous.

Some manufacturers are already producing technology that could create UHDTV content. A camera known as the RED ONE is one example. It can shoot 4,000 lines of resolution at 30 frames per second. The output of the RED ONE isn't necessarily meant for televisions. Instead, filmmakers can use the camera to shoot HD movies for the cinema. In case you're curious, the RED ONE creates images made up of 12,065,000 pixels [source: Red.com].

Again, packing that many pixels into a smaller television wouldn't necessarily create a perceivably better picture. But for giant screens and movie theaters, it's a requirement. You need each pixel to be tiny to create high-definition images.

The limits of HDTV aren't really technologically mandated -- they're biologically dictated. If a human being can't tell the difference between a 26-inch (66-centimeter) picture that has fewer than 1,000,000 pixels and another that has 12,065,000 pixels, there's no point in pushing the technology further. For the average consumer, a 1080-pixel resolution will probably be enough. As is the case with many things in life, more does not always equal better.

Learn more about HDTV technology by following the links below.