What You Can Learn from Guitar Hero and Rock Band 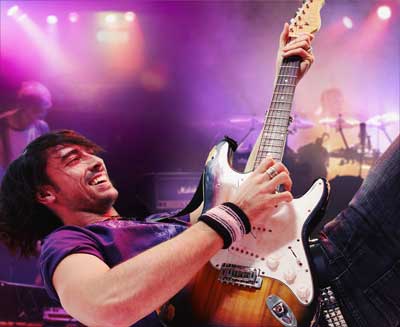 Guitar Hero won't instantly make you a real life rock star, but it can teach you some fundamentals of guitar playing.
Paul Bradbury/Stone/Getty Images

Once you get the finger movements along the fret buttons (the guitar buttons you push to strum out tunes), one of the hardest parts of playing Guitar Hero is catching the rhythm. The tunes you play don't necessarily match up to the familiar melody you sing because the game alternates between the lead and rhythm guitar sections, depending on the song.

Knowing how to listen for the rhythm is one skill that links the video game with real guitar playing. Anecdotal evidence shows that younger Guitar Hero players who can blaze through songs on expert difficulty have picked up real guitar songs much faster than expected [source: Manjoo]. Along with that, it can expose you to the different types of notes involved in guitar playing.

While you won't learn chords or tablature (musical notation that tells players where to place fingers), the scrolling fret bar in both Guitar Hero and Rock Band, which guide you through the songs, can prep you for it [source: Musgrove]. Moving your fingers rapidly along the buttons may also get you used to stretching those fingers for playing chords.

Because of Guitar Hero's and Rock Band's popularity, particularly with the younger set, music stores, teachers and even industry associations have jumped on the bandwagon, touting the video games' potential as electronic tutors. In early 2007, the International Music Products Association partnered with RedOctane, the Guitar Hero publisher, to encourage players to take music lessons [source: Musgrove]. There's even an official Guitar Hero book of tablature.

­If you really want to put your Rock Band time to good use, however, put down the guitar or bass and pick up the sticks. Although real drums dwarf the game's set, many agree that if you can pound with perfection in Rock Band or Guitar Hero World Tour (which also features drums), you can do it in any garage or practice space you wish. Since you use life-sized wooden sticks, the motions are identical to actual drumming. What's more, because you have to follow the same beats, it can make an effective learning tool.

But one thing is certain when it comes ­to playing instruments in the video games or reality: Your success will depend on what you put in. Now, go forth and rock!

For related information about Guitar Hero and other video games, jam on to the links below.­ //]]]]> ]]>