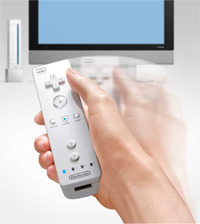 Scientists are also exploring the possibility of developing biosensors for VR use. A biosensor can detect and interpret nerve and muscle activity. With a properly calibrated biosensor, a computer can interpret how a user is moving in physical space and translate that into the corresponding motions in virtual space. Biosensors may be attached directly to the skin of a user, or may be incorporated into gloves or bodysuits. One limitation to biosensor suits is that they must be custom made for each user or the sensors will not line up properly on the user’s body.

Mary Whitton, of UNC-Chapel Hill, believes that the entertainment industry will drive the development of most VR technology going forward. The video game industry in particular has contributed advancements in graphics and sound capabilities that engineers can incorporate into virtual reality systems’ designs. One advance that Whitton finds particularly interesting is the Nintendo Wii’s wand controller. The controller is not only a commercially available device with some tracking capabilities; it’s also affordable and appeals to people who don’t normally play video games. Since tracking and input devices are two areas that traditionally have fallen behind other VR technologies, this controller could be the first of a new wave of technological advances useful to VR systems.

­Some programmers envision the Internet developing into a three-dimensional virtual space, where you navigate through virtual landscapes to access information and entertainment. Web sites could take form as a three-dimensional location, allowing users to explore in a much more literal way than before. Programmers have developed several different computer languages and Web browsers to achieve this vision. Some of these include:

Of course, many VE experts would argue that without an HMD, Internet-based systems are not true virtual environments. They lack critical elements of immersion, particularly tracking and displaying images as life-sized.