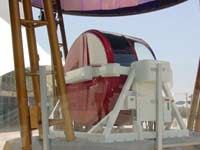 Immersion within a virtual environment is one thing, but for a user to feel truly involved there must also be an element of interaction. Early applications using the technology common in VE systems today allowed the user to have a relatively passive experience. Users could watch a pre-recorded film while wearing a head-mounted display (HMD). They would sit in a motion chair and watch the film as the system subjected them to various stimuli, such as blowing air on them to simulate wind. While users felt a sense of immersion, interactivity was limited to shifting their point of view by looking around. Their path was pre-determined and unalterable.

Today, you can find virtual roller coasters that use the same sort of technology. DisneyQuest in Orlando, Florida features CyberSpace Mountain, where patrons can design their own roller coaster, then enter a simulator to ride their virtual creation. The system is very immersive, but apart from the initial design phase there isn't any interaction, so it's not an example of a true virtual environment.

Interactivity depends on many factors. Steuer suggests that three of these factors are speed, range and mapping. Steuer defines speed as the rate that a user's actions are incorporated into the computer model and reflected in a way the user can perceive. Range refers to how many possible outcomes could result from any particular user action. Mapping is the system's ability to produce natural results in response to a user's actions.

In the next section, we'll look at some of the hardware used in VE systems.

Developers have discovered that users feel a stronger sense of telepresence when interaction is easy and interesting, even if the VE isn't photorealistic, whereas very realistic environments that lack opportunities for interaction cause users to lose interest relatively quickly.