What is MHL and what devices have it? 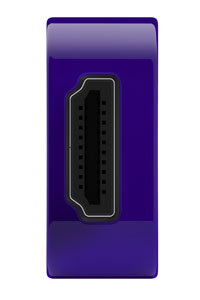 The MHL connector on a Roku Ready Streaming Stick may look like a HDMI interface at first glimpse, but it's actually a different technology.
Image courtesy of Roku

Mobile High-definition Link (MHL) is a relatively new interface, rolled out in 2011, that allows you to connect mobile and portable devices to a television via an MHL-enabled port. The standard is being developed and licensed by the MHL Consortium, a collection of electronics manufacturers started by Sony, Toshiba, Samsung, Nokia and Silicon Image (the creator of the technology). A wide number of additional electronics manufacturers have signed on as adopters.

The MHL port has the same form as an HDMI port, but it isn't HDMI. HDMI is High-Definition Multimedia Interface, a standard connector included on most new TVs, which allows for uncompressed high-definition digital video and multi-channel audio via a single cable. MHL also allows for the same quality of video and audio input, and uses the same physical end-connector, but it's a different technology that uses five wires or pins to transmit high-def video and audio from a device to your TV while at the same time sending power back to the device.

MHL (and newer HDMI) standards also include Consumer Electronics Control (CEC), which makes it possible to use your TV's remote control to operate the plugged-in device. With HDMI, this only works if both the device and TV are the same brand. But with MHL, you should be able to use your TV remote to control any MHL-enabled device, regardless of brand.

There are some MHL-enabled mobile phones that you can connect to an HDMI or MHL-enabled television set or monitor via a special MHL-to-HDMI adapter to display the phone's output to the screen. The cable connects to a micro-USB port on the phone and to an HDMI or MHL port on the display. An internal switch in the device allows it to determine which is plugged in, the adapter or a normal micro-USB cable, and it reacts accordingly. If the monitor is just HDMI and not MHL, a power supply needs to be plugged into the adapter via another micro-USB port. But if it's plugged into an MHL port, the monitor will power the device while it's streaming. Keeping your mobile phone powered means that you can use it to play content to a large screen and not have to worry about rendering it temporarily useless by draining the battery.

There are more MHL-enabled TVs on the market now than there were when the first Roku Streaming Stick came out, but they are still relatively rare in the wild compared to TVs with just HDMI. You can check a TV's technical specifications to see whether it has the technology, or check your TV for a port labeled MHL.

Fortunately, HDMI is ubiquitous, and you can now pick a Roku Streaming Stick for either type of port. Read on to find out if this device really converts your TV into a Smart TV.