What is the Roku Streaming Stick? 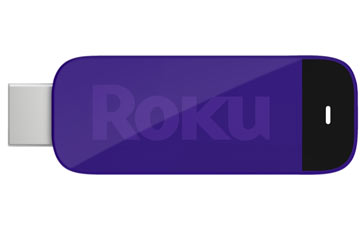 The Roku Streaming Stick is the size of an average USB thumb drive.
Image courtesy of Roku

The Roku Streaming Stick takes all the capabilities of the current Roku box, the smallest of which is 3.5 by 3.5 by 1 inches (8.9 by 8.9 by 2.5 centimeters), and crams them into a tiny thumb drive-sized form. There are two versions: the original MHL version (now called the Roku Ready version) measuring 2.7 by 1 by 0.4 inches (6.9 by 2.5 by 1 centimers), and the new HDMI version measuring 3.1 by 1.1 by 0.5 inches (7.9 by 2.8 by 1.3 centimeters). Both plug directly into a television port and allow you to stream shows, movies, music and more, all via your home WiFi network, without taking up the living room real estate required by current set-top boxes.

They stream at up to 1080p video resolution and provide digital over HDMI audio output with 5.1 and 7.1 surround pass through with applicable content. Both Streaming Sticks are compatible with 802.11a/b/g/n dual-band WiFi, the faster the better for HD streaming. Roku recommends a minimum of 1.5 Mbps to view standard definition and 3.0 Mbps to view HD.

The Roku Ready version (the original Streaming Stick released in 2012) requires an MHL (Mobile High-Definition Link) port on your television or monitor, but the new version works with an HDMI port, which can be found on all modern HDTVs. The Consumer Electronics Control (CEC) capabilities inherent in MHL allow you to use the remote that came with your TV to control the Roku Ready stick, rather than a separate Roku remote, although you can purchase a Roku remote separately if you would prefer. The MHL port also powers the Streaming Stick, so there is no need to plug the device into a power supply, making it the most unobtrusive choice. But MHL is still relatively rare, unfortunately. You can check the Roku web site to find out what TVs and other devices are certified as Roku Ready, and check the MHL Consortium site to find out what display devices currently incorporate MHL.

The new HDMI version of the Streaming Stick requires that you plug it into a power supply (either your TV's USB port or a wall socket). The device has a micro-USB port, and comes with a USB power cable and wall adapter. There's also a reset button near the micro-USB port. It comes with a basic Roku RF remote control (the type without motion control or a headphone jack).

You can also download an iOS or Android app to use your phone or tablet as a remote and to throw video, photos and other content to your TV, although it can't mirror just anything from your phone. The Roku Streaming Stick and the Roku 3 allow you to cast Netflix and YouTube videos directly from your phone, and all Roku models allow you to send locally stored videos, photos and music to your TV. The app has been updated for the launch of the new Streaming Stick.

To find out which version is best for you, read on to find out what an MHL port is and whether your current TV set is likely to have one.