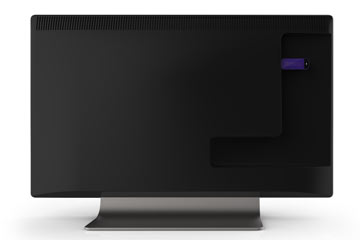 The Roku Streaming Stick is tiny -- unlike other streaming devices, once you plug it into your television, you won't even see it.
Image courtesy of Roku

Remember the bygone days when you were forced to watch television in real-time as it aired? If you came into your favorite program late or missed it entirely, you were out of luck until one of the big three networks, PBS or a UHF channel decided to play it again. Which might be never. You were irrevocably tied to the schedules set by the TV networks.

We got a taste of the good life with the invention of the programmable VHS player, which allowed us to record shows on magnetic tape from a single channel during set time ranges when we weren't home. This ability jumped forward light years with the creation of the DVR (Digital Video Recorder), which allows you to select and save programs from different channels to a hard drive, play them back at will, skip commercials, and even pause to run to the bathroom or rewind during shows that are currently airing. Cable and satellite TV companies began to offer their own DVRs to subscribers for an extra monthly fee. They also started providing video on demand, which enables you to pick and choose content to stream to your TV through your cable box, although choices are often limited by your channel subscriptions.

And more recently, the ever-increasing Internet bandwidth that makes it possible for us to stream large amounts of high-quality content has led to the creation of services like Netflix, HuluPlus and Amazon Prime Instant Video, which host and stream television shows and movies to their subscriber base via the Internet. These have given us far and away more content than we had access to before, even after cable increased our channel options from fewer than you could count on both hands to the low hundreds. The networks have gotten in on the streaming game, as well, with broadcasters like ABC and HBO allowing you to view shows online shortly after they air.

These innovations ushered in the next step in the evolution of television: set-top boxes like the Roku, Boxee Box and Apple TV. These new-ish devices allow you to stream a multitude of shows, movies and other content right off the Internet onto your nice big TV, rather than forcing you to huddle around your tiny computer monitor. They largely eliminate the need for storage space and further untether you from fixed programming schedules.

The tiny Roku Streaming Stick brings us still further into the future of streaming entertainment onto our big-screens. It is a small device, not much larger than the typical thumb drive, that plugs directly into a port on your TV and allows you to stream television shows, movies, music, games and other content from the Internet, in some cases without extra cables or remote controls.

Next, find out more about the current Roku box and what it does.