The Roku Streaming Stick vs. Other Set-top and Stick Options 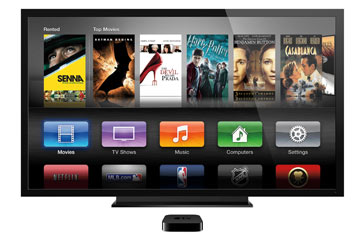 Apple TV is one of Roku's competitors, but as of March 2014, they don't offer a product comparable in size to the Roku Streaming Stick.
Image courtesy Apple, Inc.

There are many set-top boxes stick devices that offer different features and sets of channels at widely varying prices. Picking the one that's best for you requires a bit of research, but here are a few of the offerings as of mid-2014.

Boxee Box, like Roku, offers a large number of channels, and has a few extra perks, like streaming from your home network, a full Web browser, a qwerty keyboard on the back of its remote control, two USB ports plus Ethernet, and the availability of the Live TV device, a plug-in contraption that lets you stream local broadcast stations. Boxee is priced much higher than Roku, though, at around $180 for the box, and $50 for the Live TV device. Boxee was purchased by Samsung in 2013, but the devices are still on the market as of 2014.

Apple TV streams content from the iTunes library on your computer straight to your TV via an HDMI cable and WiFi. It also streams over 30 channels including Netflix, HuluPlus, HBO Go, YouTube, Vimeo, Flickr, Crackle, PBS, several Disney channels and a few sports channels. It is missing some of the major players (no Amazon, Spotify or Pandora, for instance). Like all but the Roku 3, it doesn't allow for external storage (besides your computer iTunes content) and acts as a streaming-only device. But Apple TV allows you to mirror content from your iPhone or iPad straight to your TV, so it might be a good choice if have an iOS device or if you are a heavy iTunes user. It retails for $99.

Google TV comes integrated into some TVs, but is also available via set-top boxes including the Sony Internet Player for around $130 and the VIZIO Co-Star for around $100. These include a full Android operating system with the Chrome Web browser. Both come with remotes that include a touchpad and keyboard and enable you to use your TV as a basic app-type computer, but require a little more computer literacy than boxes like the Roku. Sony has come out with a more full-featured MHL stick with Google TV capabilities called the Bravia Smart Stick. It only works with new Sony Bravia HDTVs and carries a price of around $150.

In late 2013, Google unleashed a wildly popular stick streaming device called the Chromecast. At $35 retail, it is about $15 less than the HDMI Roku Streaming Stick. With only 14 apps as of this writing, it doesn't have nearly as many channel choices, although you can purchase content through Google Play and cast Chrome browser pages. Chromecast also doesn't have Roku's TV interface or handy cross-channel search feature, and doesn't come with a remote. It uses your mobile phone or tablet (or even your laptop in some cases) as the remote and the interface. Like the latest Roku stick, it is HDMI and therefore has to be plugged into a power source. Your phone and Chromecast have to be connected to the same WiFi network for it to work.

Two other stick devices started as Kickstarter projects in 2012 and are both now on the market: the Equiso Smart TV and the Pocket TV by Infinitec. Both are thumb drive-sized sticks that plug directly into your TV and allow you to use an Android operating system to surf the net or stream high-definition content. The Equiso is an MHL stick that also works with HDMI when plugged into power. It retails for $69. The Pocket TV is HDMI-only and its list price is $99 or more, depending upon remote model, but it can be had for half price on sale.

Truth be told, you may already have a streaming device hooked up to your TV. The Xbox 360, PS3 and Wii gaming platforms and many Blu-ray players and DVRs provide streaming via a host of apps. Xbox requires an annual Xbox Live Gold membership, the Tivo DVR has a monthly fee on top of the hefty box price and cable and satellite DVR boxes require monthly subscription fees.

Existing Roku boxes also compete with their little stick siblings, since they provide the same interface and streaming experience. The HDMI Roku Streaming Stick is tied with Roku 1 as the cheapest Roku, plus its diminutive size and the addition of dual-band WiFi and Netflix and YouTube casting are advantages.