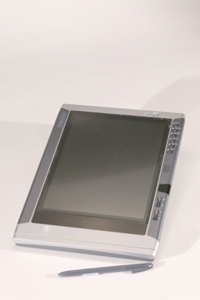 Back in 1975, Businessweek ran an article about the office of the future. The article predicted that the typical office worker would have a work computer by 1995. That prediction was pretty much spot on. But some of the people interviewed for the piece disagreed about whether we'd manage to get rid of paper in the office. Now more than 30 years later, it's clear that going paperless can still be a challenge in the electronic age.

One possible reason for paper sticking around long after we've developed computers, electronic databases, smartphones and tablets is that it's convenient and versatile. Although typing up a document on a computer and storing it electronically may make more sense than generating a paper trail, simple tasks like taking notes or filling out forms tend to be easier with paper. That's where e-writers come in.

A basic e-writer is a device upon which you can jot down notes by writing on the screen itself. Depending upon the implementation of the tablet, you may have to use a stylus or you may be able to use your finger. Many e-writers have handwriting-recognition software that translates handwriting into plain text.

The idea isn't a new one, but it's taken some time for technology to advance sufficiently enough for the devices to be useful. Could e-writers finally close the book on paper?

There are different types of e-writers. Dedicated e-writers may not have many features beyond allowing you to take notes or fill out forms on a screen. Many tablet devices have apps that record notes or translate handwriting into text. But though there are dozens of variations, most e-writers do share a few traits in common.

One of those traits is a touch-screen interface. This is what lets you jot down your thoughts on an electronic device. The job of the touch screen is to detect and track your touches. There are several ways to do this but most e-writers use either a resistive screen or a capacitive screen. Both types track you using electricity.

Resistive screens detect touch through pressure. A resistive screen has several layers. The top layer, which acts as the device's touch surface, bends as you press on it. This makes it come into contact with lower layers. When the layers touch, they form a circuit. A weak electronic signal passes through and the device detects a touch. Moving the point of pressure around the surface changes the contact point and the device tracks the movement.

A capacitive screen doesn't detect pressure. Instead, it detects changes in an electric field whenever a conductive material makes contact with the screen. Your fingers -- along with the rest of you -- are conductive. Even the lightest touch on a screen will cause the electric field to change, registering a touch.

There are advantages and disadvantages to both types of screens. Resistive screens tend to be less expensive to produce, driving down the cost of the gadgets. They also tend to detect touches with more precision than capacitive screens. And you can use anything to interact with a resistive screen -- your finger, a stylus or any other object that can apply pressure to the screen.

Not all e-writers must expend energy to detect a touch on the screen. Let's take a look at how some liquid crystals can record your notes. 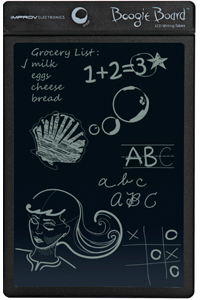 The Anatomy of an E-writer

There are a few other components that e-writers share with one another. The brain of the e-writer is a microprocessor that executes operations on data. An operation may be as simple as sending a scribbled note to memory so that you can retrieve it later. Or it may involve executing complex algorithms to translate chicken scratch into text.

An algorithm is a mathematical set of directions. Handwriting-recognition algorithms analyze the motions you make on the touch-screen interface and attempt to match them to letters. Depending upon the algorithm's sophistication, it may be able to interpret both print and cursive writing. Paired with word-recognition software, the algorithm may be able to make a best guess at what you were writing and complete a word even if you don't dot every i and cross every t.

The type of microprocessor in an e-writer varies on the make, model and manufacturer. Important features in a mobile device microprocessor include a compact design and high efficiency. As microprocessors do work, they generate heat. Too much heat can cause electronics to malfunction. Efficient microprocessors generate as little heat as possible while still providing a satisfactory experience.

Another part of the e-writer's brain is its memory. Solid-state memory chips, also known as flash-memory chips, provide storage for mobile devices. When you write something on an e-writer and save it, the processor sends the data in a series of bits -- zeros and ones -- to storage. Some e-writers may allow you to use removable memory cards, increasing the amount of storage at your disposal.

The third component you'll find in most e-writers is a battery. An e-writer's battery life depends on many factors, including the type of processor it has, the type of touch-screen interface it uses and other components.

Several other features may be included, depending upon the e-writer. Some may feature full-color displays rather than monochromatic ones. You can find e-writers with WiFi connectivity and biometric components. Some e-writers may seem more like fully fledged tablets than dedicated writing devices. The definitions for e-writers, smartphones, tablets and related mobile devices aren't rigid. E-writers might never become a successful, distinct product category. Instead, the e-writer functions may become part of other, more established categories of electronics.

In 1992, Apple announced development of the Newton MessagePad, a handheld device that included handwriting recognition. The early version of the handwriting-recognition software was notorious for making mistakes. While Apple quickly released an update, the damage had been done and the gadget had problems shrugging off a bad reputation.

I'm conflicted when it comes to electronics with limited features. On the one hand, I like dedicated e-readers, particularly those that use electronic ink. I also like dedicated MP3 players -- that way I can carry all my music with me without filling up my phone with sound files or draining its battery faster. But when it comes to e-writers, I think I'd prefer carrying a smartphone or tablet with multiple functions beyond a simple note-taking functionality. However, part of that could be due to my atrocious handwriting.