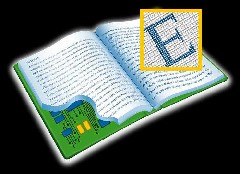 With a world full of monitors and electronic displays made with liquid crystals, light-emitting diodes and gas plasma, you probably don't think of paper as being a revolutionary display technology, but the Chinese invention of paper in 105 A.D. forever changed the way the world communicates. Without it, books might still be printed on silk scrolls that only the wealthy could afford, making literacy a rare skill.

Look around you: It would be nearly impossible to live one day without coming into contact with paper in some form. This year, the world will consume an estimated 280 million tons of paper, according to the National Association of Paper Merchants in England. That is equal to 56 trillion sheets of letter-size 20-pound bond paper. (See this question of the day on paper weight.)

For nearly 2,000 years, ink on paper was the only way to display words and images, and it still beats computer displays when it comes to portability and price. Paper also doesn't require an external power supply. Yet it does have some limitations: Once you've printed words on paper, those words cannot be changed without at least leaving some marks, and it is also difficult to carry around a large number of books.

Scientists are now close to developing a revolutionary technology that could replace paper, called electronic ink! In this edition of How Stuff Will Work, you will find out about how electronic ink is made, how it will allow you to carry a whole library in one book and how it could be used for cheaper computer displays.

Two companies are simultaneously developing similar electronic inks -- E Ink of Cambridge, MA, and Xerox in Palo Alto, CA. At first glance, a bottle of electronic ink looks just like regular ink, but a closer examination shows something much different. Although the two companies' products vary slightly, here are the three components of both electronic inks that give them the ability to rearrange upon command:

Electronic ink can be applied to the same materials that regular ink can be printed on. In the case of a digital book, the pages would be made out of some kind of ultra-thin plastic. The ink would cover the entire page, separated by cells that resemble the cells on graph paper. Think of these cells as pixels on your computer screen, with each cell wired to microelectronics embedded in this plastic sheet. These microelectronics would then be used to apply a positive or negative charge to the microcapsules to create the desired text or images.

Xerox and E Ink are using different techniques to develop their electronic inks. To help people understand how E Ink's technology works, the company compares the millions of microcapsules inside the ink to clear beach balls. Each of these beach balls is filled with hundreds of tiny, white ping-pong balls. And instead of air, the beach ball is filled with a blue dye. If you looked at the top of this beach ball, you would see the ping-pong balls floating in the liquid, and the beach ball would appear white. But if you looked at the bottom of the ball, it would appear blue.

Now, if you were to take thousands of these beach balls and lay them out on a field, and make the ping-pong balls move between the top and bottom of the beach balls, you could make the field change color. That's the principle behind E Ink's product.

In reality, these microcapsules are only 100 microns wide, and roughly 100,000 microcapsules can fit into a square inch of paper. In each of those microcapsules there are hundreds of smaller pigmented chips. In prototypes, E Ink is currently working with white chips and blue ink, but it is working to develop other color inks that could lead to multicolor displays.

Xerox is working on its own version of electronic ink, called electronic paper, which it first developed in the 1970s. However, instead of using paint chips floating in a dark liquid, it has produced microscopic balls that are black on one side and white on the other. Similar to E Ink's technology, these microscopic balls respond to an electrical charge, which rotates the ball from black to white to produce patterns on a page. To produce pages for digital books, Xerox is developing rubber sheets in which these microscopic balls will be suspended in an oily liquid.

One of the obstacles in developing a digital book out of electronic ink has been wiring the pages to create an electrical charge while still maintaining a paper-thin page. In this aspect, E Ink has taken the lead in developing digital books by signing an agreement with Lucent Technologies that would give E Ink the rights to use plastic transistors developed by Lucent. These tiny transistors can be printed onto a page to provide the adequate charge needed to switch the E Ink chips from one color to another.

The Holy Grail of electronic ink technology is a digital book that can typeset itself and that readers could leaf through just as if it were made of regular paper. Such a book could be programmed to display the text from Ernest Hemingway's "The Old Man and the Sea," and once you've finished that tale, you could automatically replace it by wirelessly downloading the latest "Harry Potter" book from a computer database. In May 2000, E Ink CEO Jim Iuliano predicted that electronic books could be possible by 2003 or 2004. Xerox has introduced plans to insert a memory device into the spine of the book, which would allow users to alternate between up to 10 books stored on the device.

Just as electronic ink could radically change the way we read books, it could change the way you receive your daily newspaper. It could very well bring an end to newspaper delivery as we know it. Instead of delivery people tossing the paper from their bike or out their car window, a new high-tech breed of paper deliverers would simply press a button on their computer that would simultaneously update thousands of electronic newspapers each morning. Sure, it would look and feel like your old paper, but you wouldn't have to worry about the newsprint getting smudged on your fingers, and it would also eliminate the piles of old newspapers that need recycling.

E Ink unveiled its first product using electronic ink -- Immedia large-area displays -- in 1999. These large signs draw only 0.1 watts of power, which means that the same power required to run a single 100-watt light bulb could power 1,000 Immedia signs. E Ink said that in electronic devices, electronic ink would use 50 to 100 times less power than liquid crystal displays because electronic ink only needs power when changing its display. For this same reason, a digital book can display the same text for weeks without any additional charge applied to it.

Electronic ink can be printed on any surface, including walls, billboards, product labels and T-shirts. Homeowners could soon be able to instantly change their digital wallpaper by sending a signal to the electronic ink painted on their walls. The ink's flexibility would also make it possible to develop roll-up displays for electronic devices.

Another advantage electronic ink has over traditional computer displays is its readability. It looks more like printed text, so it's a lot easier on the eyes. However, both Xerox and E Ink have to improve the resolution of their products for them to be viable in book or other small-print publications. Xerox has already made a display that has a 200 dots per inch (dpi) resolution, which is more than twice the resolution of an average LCD display. Lucent's printable transistors should allow E Ink to increase the resolution of its products to resemble the resolution of a printed book.

The developers of electronic ink don't expect people to throw all paper out or discard their computer monitors the instant these products hit the market. Instead, electronic ink will initially co-exist with traditional paper and other display technologies. In the long run, electronic ink may have a multibillion dollar impact on the publishing industry.