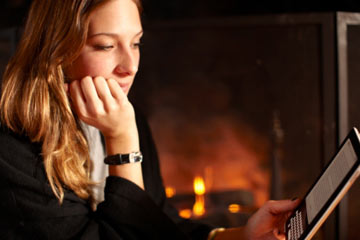 Books are a beautiful thing. They offer practical information and can tap into joy, sadness, anticipation, fear and a multitude of other emotions bound only by the depths of the imagination. It's no wonder that throughout the ages and across all cultures, people have had such a powerful passion for the printed word.

But for all the knowledge and enjoyment they provide, books are not the most convenient of possessions. Over the course of a lifetime, anyone who owns more than a few inevitably spends a significant amount of time hauling, storing, organizing, shelving, loaning and reclaiming their lexical loved ones. It begs the question: Is this the smartest way of managing literature and other texts in today's increasingly tech-smart world?

Enter the e-reader, an electronic device that allows you to read books, newspapers, magazines and any other printed material in digital format. But that's not all. Many e-readers also offer Web browsing, games, music, movies and an endless array of apps such as The Weather Channel or Microsoft Office to enhance the user experience. E-reader sales have steadily increased since the debut of the Sony e-reader in late 2006 (Amazon's Kindle launched in early 2007), totaling 13 million in 2010 [source: IMS Research].

Looking at these figures may be enough to make you wonder if e-readers will forever change the way people read. Is it possible that these electronic gadgets will ever replace books entirely? As we attempt to answer this question fully, let's take a look at the pros and cons of both e-readers and books. What limitations, if any, do e-readers have? Keep reading to find out.

Pros and Cons of E-readers vs. Books

When considering the question of whether e-readers are making books obsolete, it helps to take a look at what e-readers actually do. As of early 2011, there were at least a dozen different models on the market, each with its own specific features and capabilities. None are good at everything, and so choosing one over the other depends on which of those capabilities are most important to you.

Some e-readers are just that -- devices dedicated to displaying digital books, newspapers and magazines. Examples include Amazon's Kindle, the Sony Reader, Borders' Kobo, and Barnes and Noble's Nook. Some dedicated e-readers offer Internet connectivity and other high-end functionality, but their main purpose is to display e-books, which they generally do very well.

Other e-readers are more aptly called tablets. These devices come equipped with features like Wi-Fi, MP3 support and full-color touch screens. They're a lot like laptop computers, but smaller and a bit more portable. The Apple iPad is one example of a tablet. It isn't an e-reader in the technical sense, but its size means you can certainly use it as such. Barnes and Noble's NookColor falls somewhere in between; it's a color-enhanced tablet-style device, but with fewer capabilities than the iPad.

So how do traditional books compare to these newfangled gadgets? For starters, you can enjoy a traditional book in direct sunlight. This is tricky at best with tablet-style e-readers (think of your laptop screen on the beach at high noon), though dedicated e-readers are much better in these situations because of their black-and-white or grayscale displays. Loaning books may also be an issue with e-readers. For those who are accustomed to sharing their reading material, there are a variety of lending applications for e-books -- such as the Nook's LendMe feature -- though these may have some limitations, including time constraints on lending periods.

Cost is another potential downside to e-readers. Consumers may pay anywhere between $140 and $500 for an e-reader, and many of the most popular books (i.e., bestsellers) cost about $9.99 at best. For people accustomed to shopping at second hand book shops or borrowing the bulk of their reading material, this can be quite an investment. Only a few e-readers allow users access to library content.

Still, there's no doubt that e-readers are handy for book worms. Each has the ability to store thousands of books in one easy-to-use device, which makes these gadgets very convenient for students, travelers and anyone who does a lot of reading on the go.

That's just a quick comparison of e-readers with old-school books in terms of usability and practicality. But what does the future hold for these formats? Read on to find out. 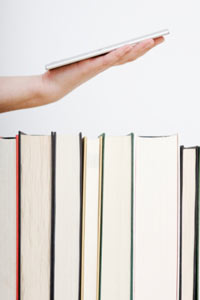